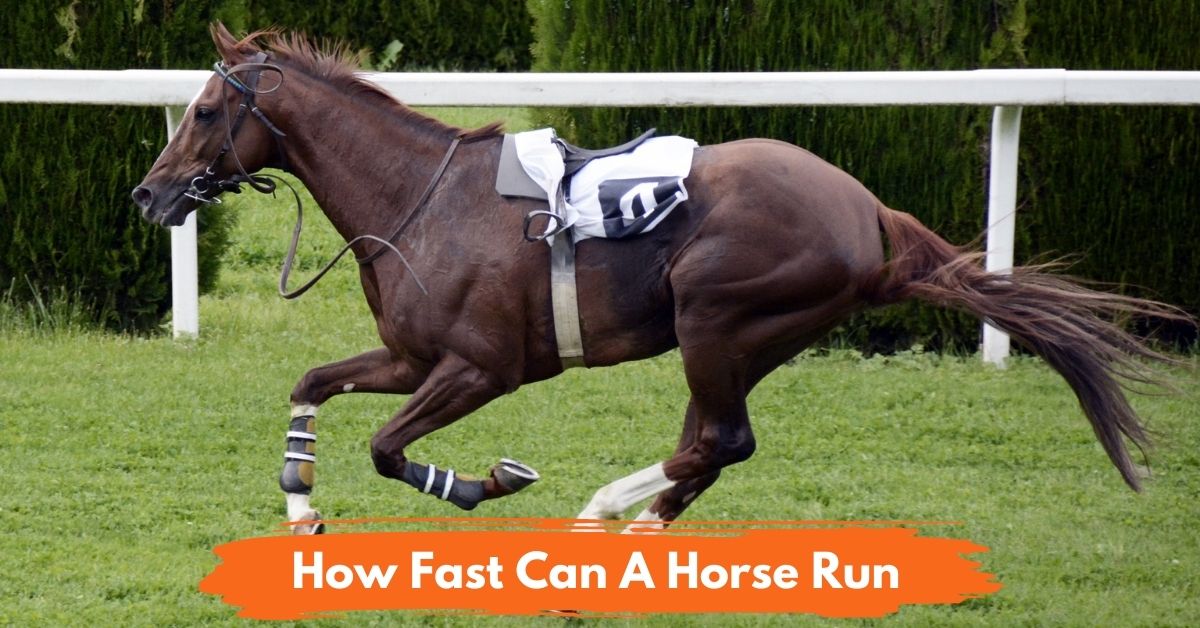 How fast can a horse run? The average horse can run between 25 and 30 miles per hour, which equates to 40 to 48 kilometers per hour. However, some horses are faster than others due to many factors.

The speed of a horse is a question that has been asked since humans first started domesticating horses. Unfortunately, while there are many studies and anecdotal evidence on how fast a horse can run, there is no definitive answer.

The speed of a horse depends on many factors, so the answer is not as simple as a single number. These factors can affect how fast a horse can run, from its breed and build to the terrain it is running on.

If you’re also curious about this question and have other related questions, read for more information. We’ll go over some important information that will help determine how fast a horse can run.

The four main gaits horses use are the walk, trot, canter, and gallop. As you can probably tell, each gait is faster and more energy-consuming than the last, with the gallop being the fastest. Here’s a brief breakdown of the average speed of each gait:

The walk is the slowest gait and is usually used for short distances. It’s also the most comfortable gait for horses as it doesn’t need as much effort as the others.

The trot is faster than the walk and is usually the main way horses travel from one place to another. Trotting involves the horse moving its legs in diagonal pairs, with each leg hitting the ground separately. 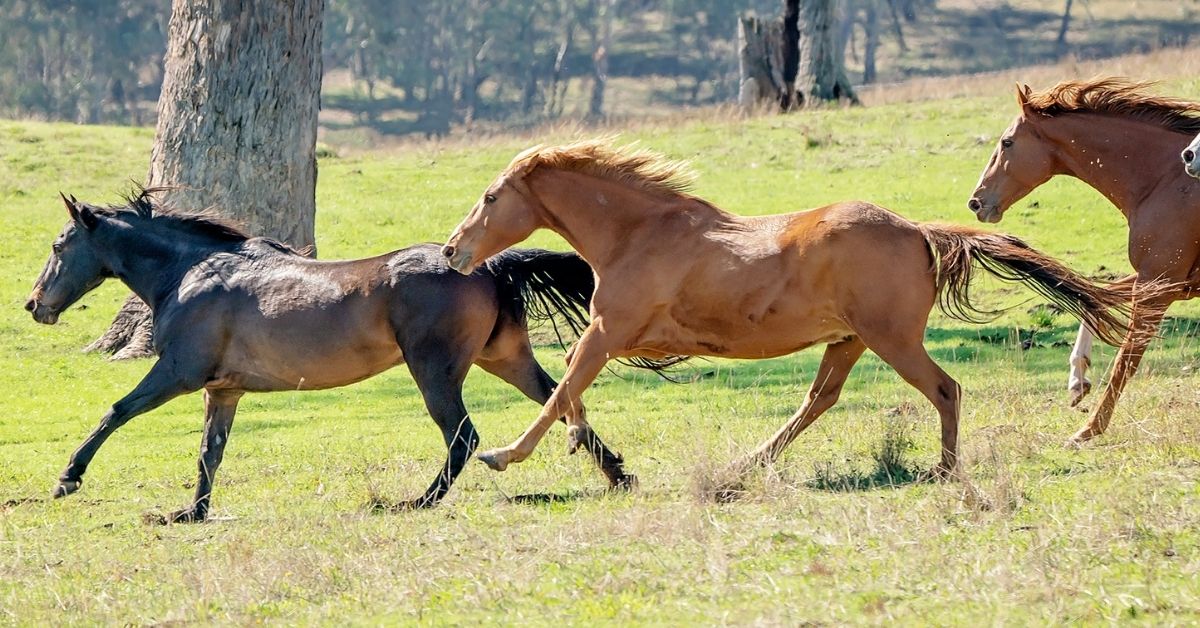 The canter is faster than the trot and is often used during long-distance travel or when horses carry light loads. It’s a variation of the two fastest gaits that a horse can perform.

However, unlike the gallop, canter is more sustainable, yet, it’s not as slow as a trot. It’s a controlled three-beat gait that falls between a trot and gallop.

The gallop is the fastest gait and is usually used for races, emergencies, or when a horse needs to quickly cover a lot of ground. However, since it burns a lot of energy, horses can only maintain a gallop for short periods.

Who is the Fastest Horse in History?

There have been a good number of horses who set records for how fast they can run. Since these incredible feats were achieved in various time periods and distances, we can’t compare them to one another.

That’s why we’ve mentioned some of the most popular equines that have broken and set records over the years.

The current record for the fastest horse in history is held by a horse named Winning Brew. She currently holds the Guinness world record for the highest race speed ever recorded over two furlongs (an eighth of a mile).

In comparison, the previous record-holder for fastest horse in the world was another Thoroughbred named Hawkster in 1989. This then 3-year-old horse ran at 37.82 mph over one-and-a-half miles with a time of 2 minutes and 22.8 seconds. 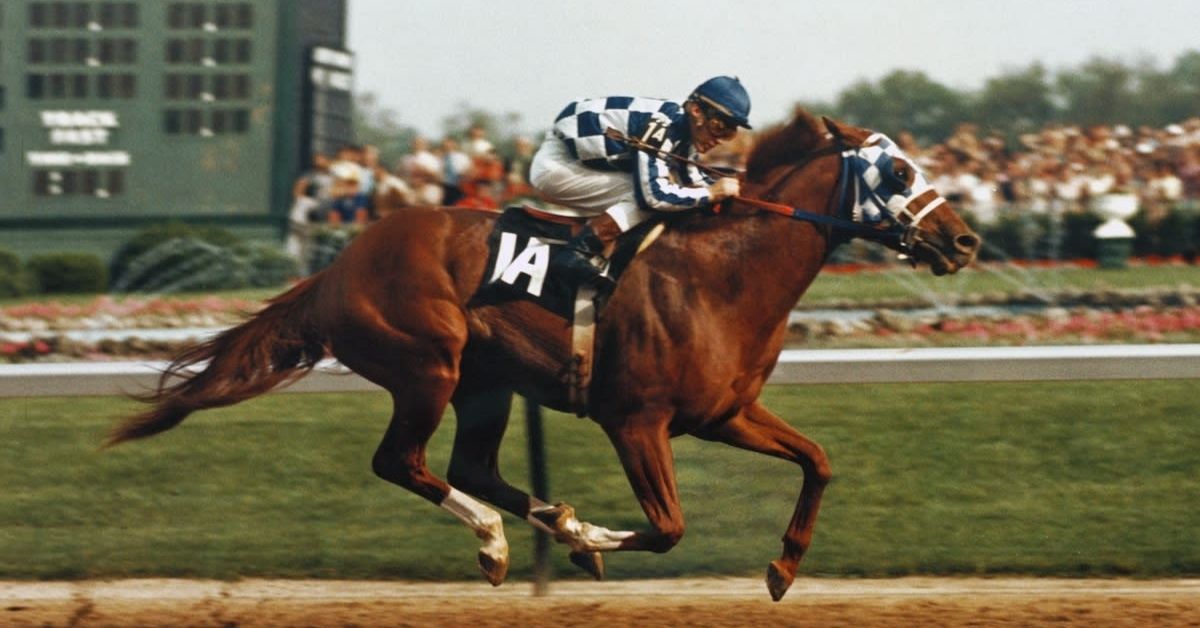 Another 3-year old Thoroughbred named Secretariat was also known for his incredible speed. He set a record at the 1973 Belmont Stakes when he ran 1.5 miles in just 2 minutes and 24 seconds, which is equivalent to 37 mph.

Man O’ War was one of the most popular horses who competed in the early 20th century. He was known for his impressive track speeds and had an average race speed of 38 mph. Since success on the track was mostly judged by how quickly the horses covered the mile, Man O’ War was famous for setting numerous records.

Seattle Slew is a distinguished Thoroughbred who won numerous horse racing competitions throughout his career. This Thoroughbred won tournaments such as the Kentucky Derby, Preakness Stakes, and Belmont Stakes.

Seattle Slew had a winning record throughout his entire career. He also set numerous records to go along with his winnings.

While there were many racehorses who set records in their time, none are as popular and influential as these five. They not only set records as the fastest horse during their time, but also showcased the speed and running ability of horses in general.

What is the Fastest Horse Breed?

Of all the horse breeds out there, Thoroughbreds are known to be the fastest. They are a horse breed developed specifically for racing and are some of the most popular horses in the world.

On average, a Thoroughbred horse can run at 38 to 44 mph (61 to 71 km/h). Their top speed is around 55 mph (89 km/h), but they can only maintain this for short distances. That’s why they are more suitable for horse racing.

When it comes to endurance riding, another popular horse sport, Arabians are known to be the best. They are intelligent horses and can cover longer distances at a slightly slower pace than Thoroughbreds.

What Factors Affect a Horse’s Speed?

A few factors can affect how fast a horse can run. When choosing a horse, it’s important to keep the following factors in mind:

Breeding plays a significant role in determining the speed of a horse. As I mentioned earlier, some horse breeds are faster than others.

If you’re looking for a horse that’s known for its speed, then you should look into getting a Thoroughbred. It’s the most popular horse breed for racing for a reason!

Young horses are generally faster than older horses. This is because they haven’t sustained any injuries and their muscles are stronger.

Older horses are still fast, but they can’t match the speed of a younger horse in its prime. However, they make up for it in other ways, such as experience and endurance. 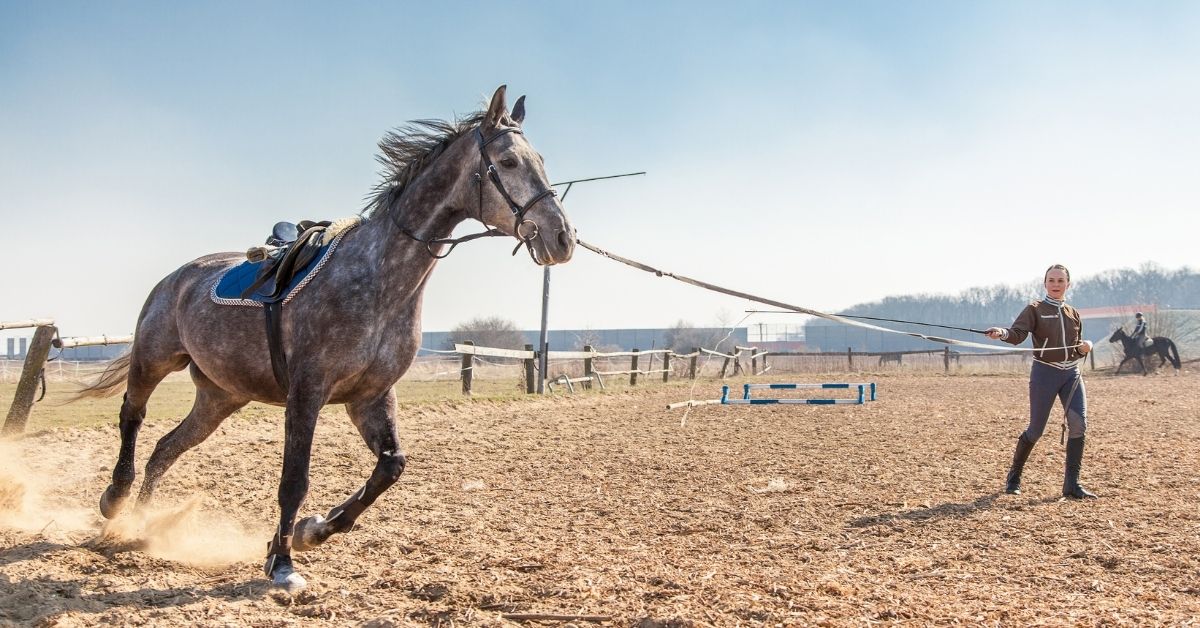 A horse that’s been trained to race will naturally be faster than one that hasn’t. This is because they’ve been conditioned to run at high speeds for long periods.

If you want a fast horse, get one with proper training for racing or other speed-related activities. It’ll make a world of difference!

Of course, if you’re planning to train the horse yourself, this factor won’t matter as much as the others.

The heavier the horse, the slower it will be—regardless if it’s a draft horse or a riding horse. That’s why racehorses are often smaller in size; they need to be light so they can run faster.

Conversely, draft horses are bred to be bigger and stronger to pull heavy loads. They’re not built for speed but rather endurance and strength.

No matter how good a horse is, if it’s not healthy, it won’t be able to run at its full potential. That’s why it’s important to check if a horse is healthy before you commit to anything.

Some health problems that can affect a horse’s speed include:

These are just some things you need to keep in mind regarding a horse’s speed. By taking all of these factors into consideration, you’ll be able to find the perfect horse for your needs!

At this point, you already have a clear understanding of how fast a horse can run. But, there may still be some things you may want to know.

This section wraps everything up by answering some common questions about horse speed.

How Fast Can Horses Run with a Rider on Its Back? 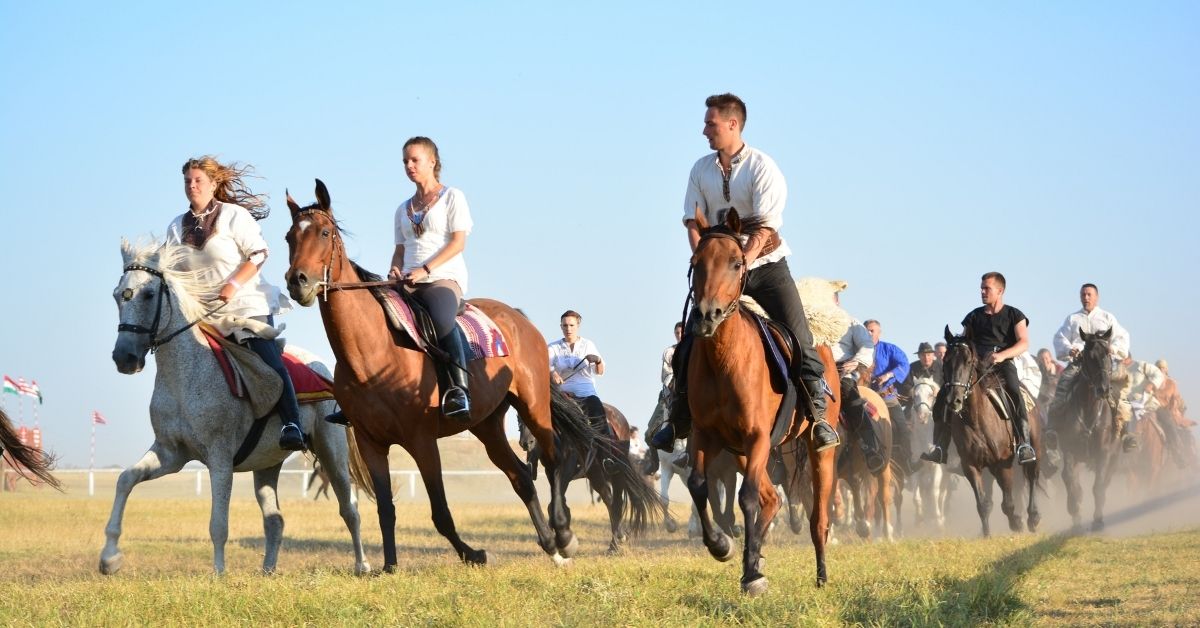 As mentioned earlier, Horse breeds such as Thoroughbreds can reach average speeds of 38 to 44 mph (61 to 71 km/h) without a rider. However, the horse’s speed will significantly reduce with a rider on its back.

On average, the speed of a Thoroughbred with a rider on their backdrops significantly to 32 to 38 mph.

The rider’s weight will also affect how fast the horse can go. A heavier rider will slow the horse down significantly, while a lighter rider will have a low to minimal impact on the horse’s speed.

Generally, a horse can carry 10% to 15% of its body weight without being significantly impacted. This means that a 500-pound (230-kg) horse can carry a rider weighing up to 75 pounds (34 kg) without any issues.

Of course, there are exceptions. Some horses are not built to carry any weight on their back, no matter how light the rider is.

How Long Can a Horse Run Without Stopping?

According to research, the average horse can run two miles (3.2 km) without stopping. However, this number will differ depending on the horse’s breed and training.

For example, a Thoroughbred that’s been properly trained for racing can run up to four miles (6.4 km) without stopping. On the other hand, a draft horse can only run for about a mile (1.6 km) before it needs a break.

Keep in mind that the mode of running will also be a factor. If your horse is galloping, it will run a shorter distance before getting tired. However, if it’s trotting or cantering, then it can go for a longer period.

How Fast Can a Quarter Horse Run?

The American Quarter horse is among the most popular breeds in the United States. It’s known for its short sprinting ability and can reach speeds of up to 44 mph (71 km/h).

Interestingly, the Quarter horse got its name from the fact that it can run a quarter of a mile (402 m) faster than any other breed in the world.

How Fast Can a Mustang Horse Run? 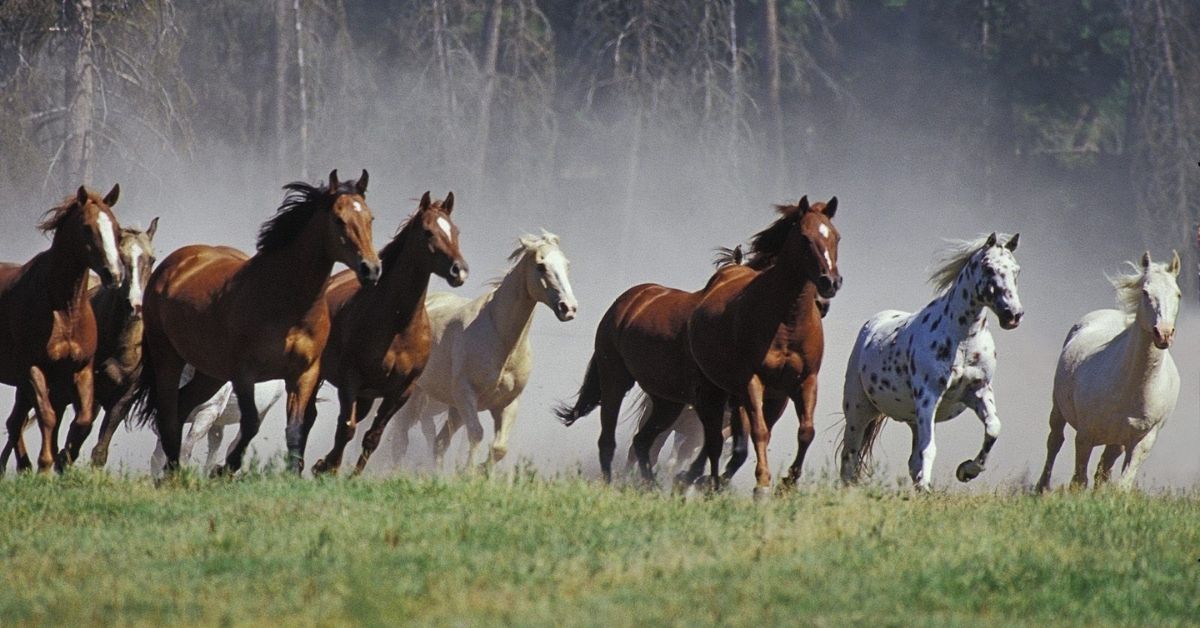 The Mustang horse is a feral horse that roams freely in the western United States. It’s a tough and hardy breed and can reach average speeds of 25 to 30 mph (40 to 48 km/h).

Interestingly, the Mustang horse is often used in agility competitions. This is because of its natural athleticism and ability to reach high speeds.

In fact, the highest recorded speed of a Mustang horse was clocked at 54 mph (87 km/h)! No wonder this breed is so popular in speed-based events.

How Fast Can a Thoroughbred Horse Run?

Interestingly, the Thoroughbred is not just fast—it’s also one of the most versatile horse breeds in the world. It’s often used in racing, show jumping, and even dressage.

The Thoroughbred is the go-to choice for anyone looking for a horse that’s both fast and versatile. Its reputation and abilities are well-deserved, and there’s no doubt that this breed is one of the best in the world.

There you have it! Now you know all about how fast horses can run. Keep in mind that horse speed will vary on many factors. That’s why it doesn’t have a flat-out answer—we have estimates and averages right now.

But one thing’s for sure: horses are incredibly fast creatures, and they never cease to amaze us with their speed and power.

Also, the numbers mentioned were obtained through thorough and extensive research. So, you can be sure that they’re pretty accurate, and you can use them as a reference whenever you need to.