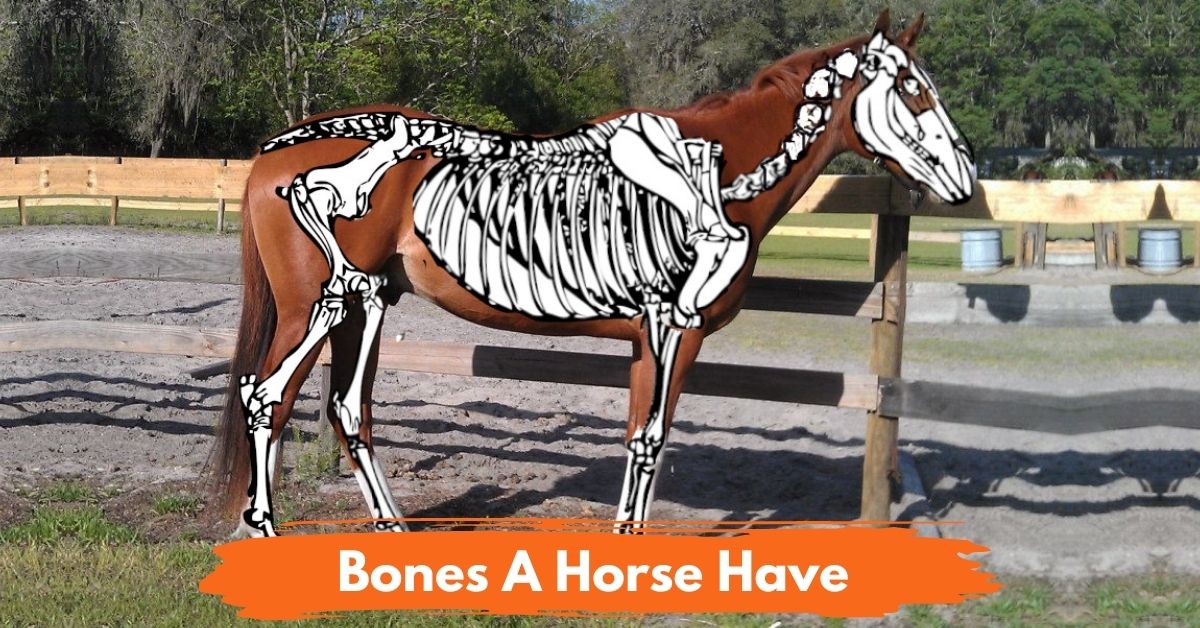 A horse has 205 bones, which is why equines have a majestic build. It took millions of years of evolution for horses to have elongated bones.

The changes improve their appearance but the speed and stride length of horses as well. They use these abilities to escape from predators. It’s the advantage of being a big-boned animal since bones comprise 40% of a horse’s weight.

Humans and horses have almost the same number of bones. But I find the latter’s skeletal system unique. This animal’s skull has bones that are twice what a human has!

Know more interesting facts about the skeletal system of horses in this article. You’ll know the bones’ functions to understand equine anatomy better.

Contents show
1 Horse Skeleton Anatomy Diagram
2 Functions of Horse Bones
2.1 Protects Vital Organs
2.2 Provides Framework
2.3 Supports Soft Parts of the Body
3 Main Parts of the Horses’ Skeleton
3.1 Axial Skeleton
3.1.1 Skull
3.1.2 Vertebral Column
3.1.3 Sternum
3.1.4 Ribs
3.2 Appendicular Skeleton
3.2.1 Bones and Joints of the Forelimb
3.2.2 Bones and Joints of the Hindlimb
3.2.3 Bones of the lower limb
4 Skeletal System Disorders
4.1 Joint Disease In Horses
5 FAQs
5.1 Where is the cannon bone on a horse?
5.2 When do horses’ bones stop growing?
5.3 How to dissolve bone spurs in horses?
5.4 How many metacarpal bones does the horse have?
5.5 Why can’t horses heal broken bones?
5.6 How long is a horse’s tailbone?
5.7 Who has more bones, a horse or a human?
5.8 Do all horses have the same amount of bones?
5.9 How many bones does a horse have in its leg?
5.10 How many bones does a baby horse have?
6 Final Thoughts

The more you know about your horse’s bones and skeletal structure the better understanding you will have of how a horse is built and how he moves.

Below is a diagram of the some of the most important bones within a horse: 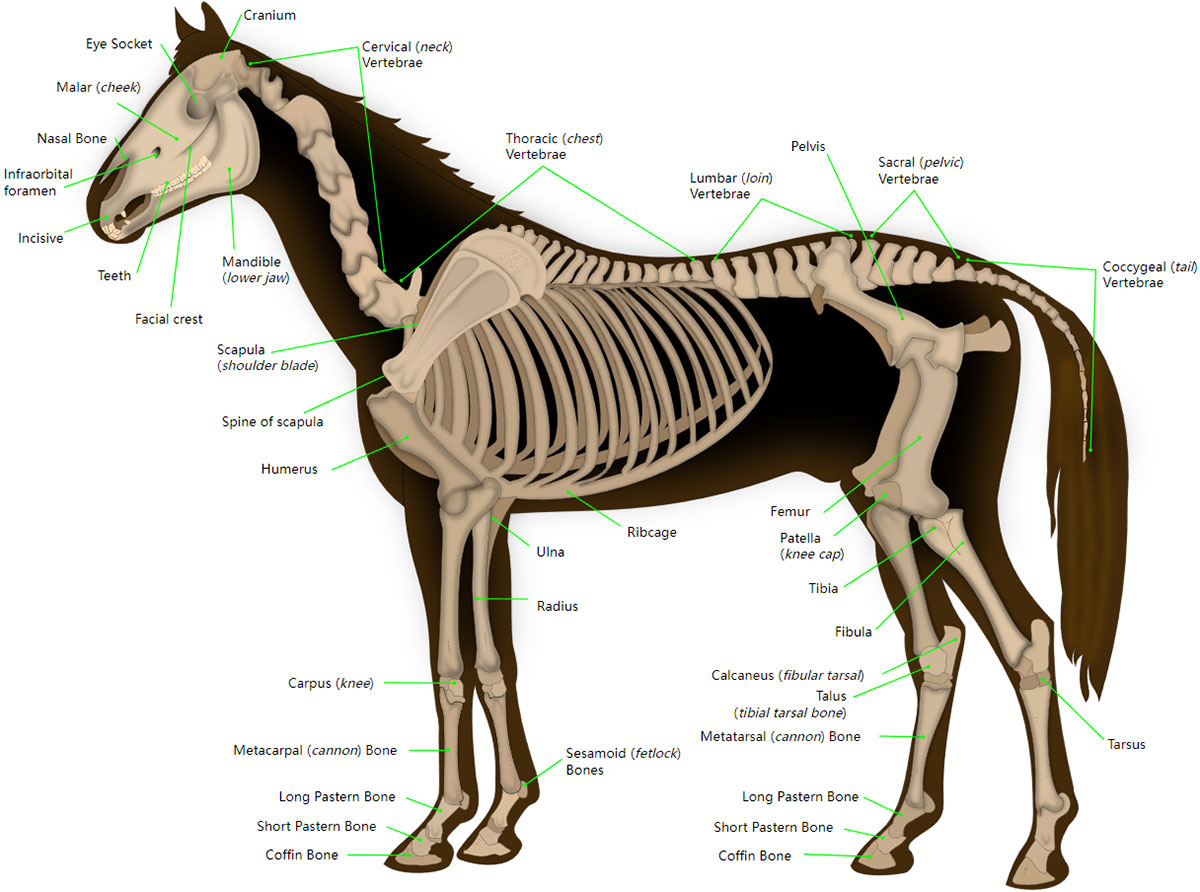 The skeleton performs the same roles in horses as other animals, it has three major functions in the body. It protects vital organs, provides framework, and supports soft parts of the body. Let’s discuss the details.

Horse bones have a rigid structure to protect vital organs. Lung, heart, and intestines are some of the internal organs under the custody of the bones.

These bones keep the calcium reservoir. They carry the marrow where blood cells develop.

Bones are not the only parts of a horse’s skeletal system. Tendons, ligaments, and cartilage are present too. But the combination of the bone’s length and angle dictates the body framework of an equine.

Thus, horses have the power and potential to become an athlete. It’s what makes these animals suitable for recreation. As you train your horses, their bones become stronger.

Exercise can change the arrangement and mass of bone tissues. But the activities don’t alter the mineral contents therein.

Supports Soft Parts of the Body

Bones support soft tissues in a horse’s body. The first example is skeletal muscles all over the bones and joints. They are responsible for movement and posture.

Bones support tendons, too, as one end of these parts connects to the muscle. It’s the same thing with ligaments as they are with one bone to another.

Main Parts of the Horses’ Skeleton

A horse’s skeletal system has two main divisions. They are the axial skeleton and appendicular skeleton.

The axial skeleton is the upper part of the equine body, from the skull to the ribs, it protects the horse’s vital parts. 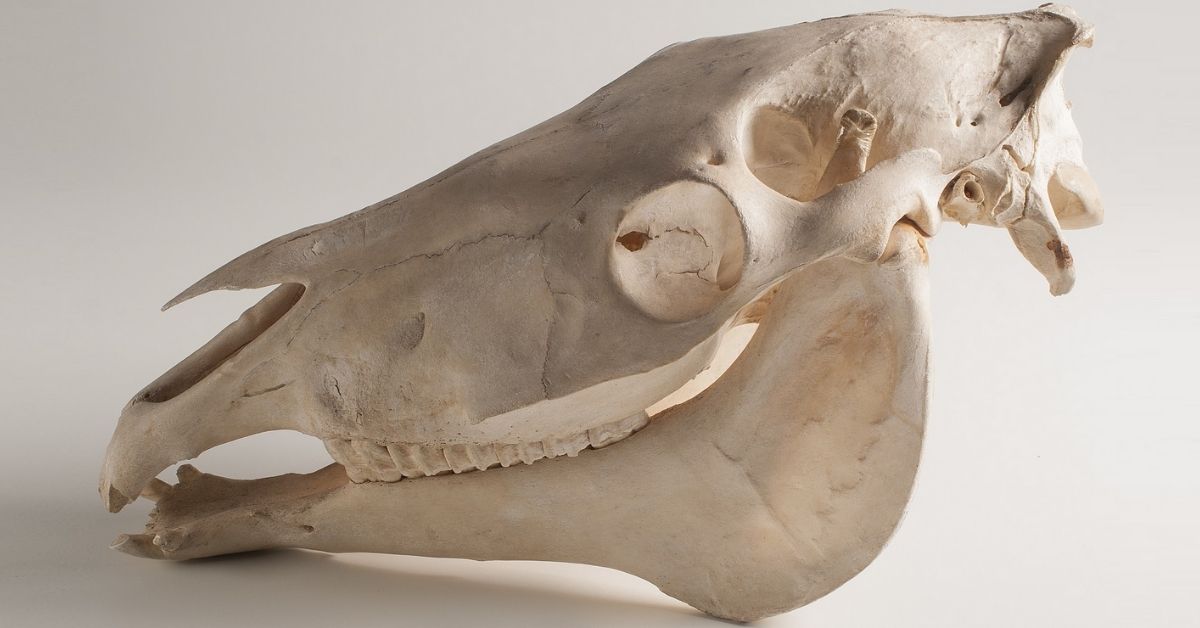 Since a horse is a large animal, its head is large and heavy. The same description goes for its skull with jawbones as the main bones. Jawbones have two parts: upper maxilla and lower mandible.

Sinuses are in the upper part of the skull. They’re holes for respiration, bringing moisture to the air, and filtering dirt. Sinuses have the vital role of making the skull lighter for the horse.

The skull lies on the vertebral column or spine. This part is a series of vertebrae that starts from the end of the tail until the skull’s base. Its length has different sections.

There are seven sternebrae in an equine’s sternum or breastbone. It’s a flat bone that acts as a chest wall. Five of them are spherical, while the 6th and 7th are flat.

This part is useful for the medical and surgical aspects of equines. Sternum contains bone marrow that is essential for therapeutic and diagnostic purposes.

A horse has 18 pairs of ribs which start from the thoracic vertebrae. But the lower part of the ribs links with the sternum.

The parts of the appendicular skeleton support the horse’s weight. They also supervise the movements, it consists of the shoulders, forelegs, pelvis and hind legs.

Bones and Joints of the Forelimb

Bones and Joints of the Hindlimb 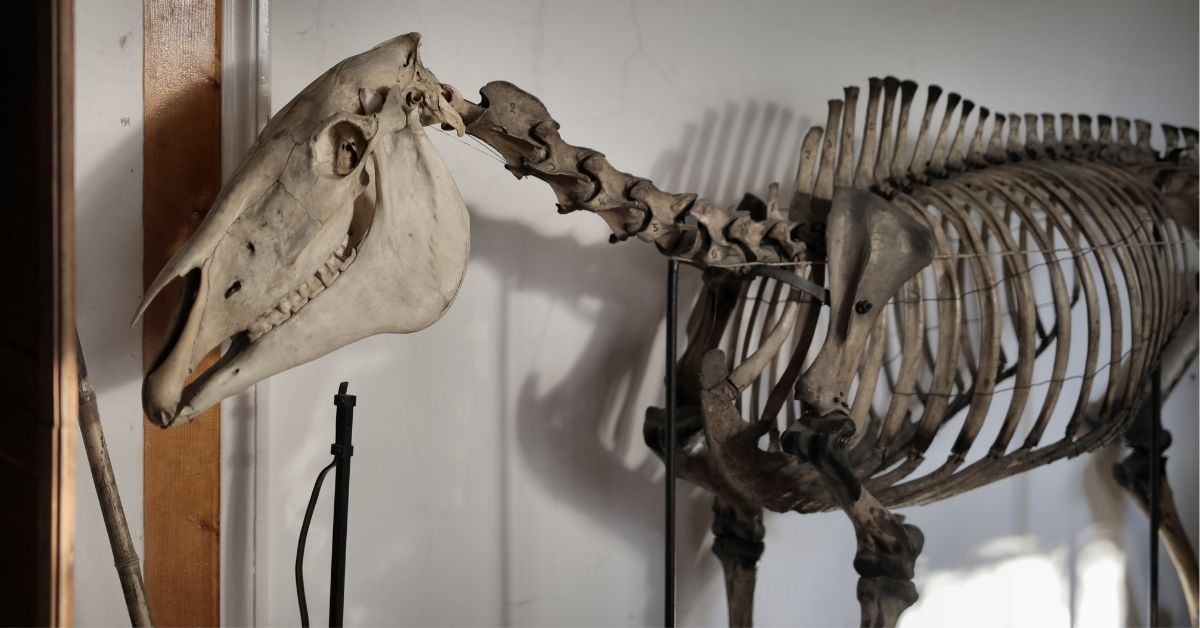 Bones of the lower limb

Lower limb bones are the parts of the front and hind legs. They are as follows.

You should know that a horse’s forelegs don’t have direct contact with the spine. The reason behind it is that equines don’t have a collarbone.

Instead, the forelegs get support from tendons and muscles. It paves the way for the horse’s mobility. Hence, it can jump while its legs fold.

In the case of hind legs, they have a connection with the vertebral column through the pelvis. These legs promote forward movement even though they only bear 40% of the horse’s weight.

Some issues arise with the bones of a horse. So, here are the skeletal system disorders that equines can have.

Performance horses are like human athletes. They experience a massive amount of stress on their joints and bones.

Gallops, jumping, and extreme performances encourage the development of arthritis. It will likely happen if the horse worked on a poor footing or did intense work while young. 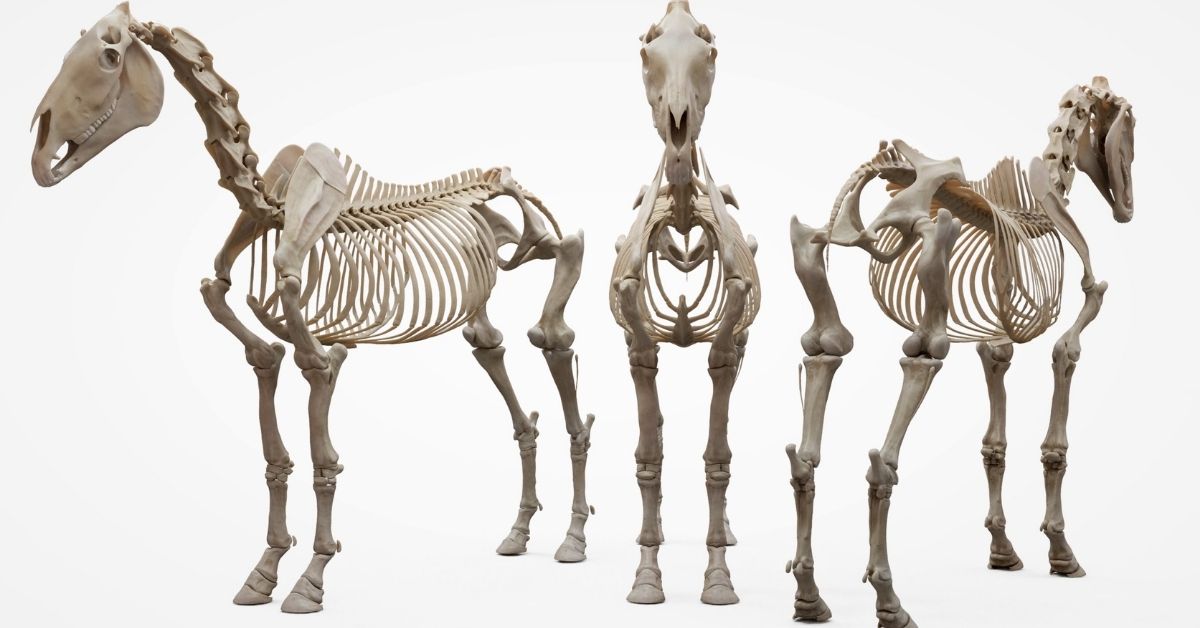 Where is the cannon bone on a horse?

When a horse has perfect conformation, it can have a cannon bone. This bone is below the knee, and it’s right in the center. It creates a perfect intersection with the ankle, hoof, laser line, and pastern.

Proper trimming of the foot also affects the horse of having a cannon bone. Not all horses have perfect conformation. In fact, it’s seldom to see a horse with flawless conformation.

Hence, there’s no need to correct the poor conformation of an adult horse. But it’s undeniable that perfect conformation contributes to better health. It does happen as the horse can gain balance.

When do horses’ bones stop growing?

Horses’ bones stop growing by the time they reach two years of age.

How to dissolve bone spurs in horses?

If your horse suffers from arthritis, you’re familiar with bone spurs. A bone spur develops around the joint surface. Its size varies from a centimeter of the sharp corner to a huge boney growth.

Dissolving bone spurs depends on severity. Mild inflammation requires adequate rest and a break from strenuous activities. You may put an icepack on the affected area.

Oral and injectable medications dissolve bone spurs in horses. Corticosteroids or intra-articular injections are for chronic cases. They ease out pain and inflammation for mobility.

How many metacarpal bones does the horse have?

There are three metacarpals in every forelimb of a horse. Only the third metacarpal or known as cannon bone is complete. Metacarpal II and metacarpal IV are splint bones that are a third shorter than the cannon bone.

The human’s metacarpals are in the middle of carpal bones and phalanges. In other words, they’re between the fingers and wrists.

But this structure works for equines as they hold their weight on their hooves. Metacarpal III is well-developed and robust to bear the weight from the limb. 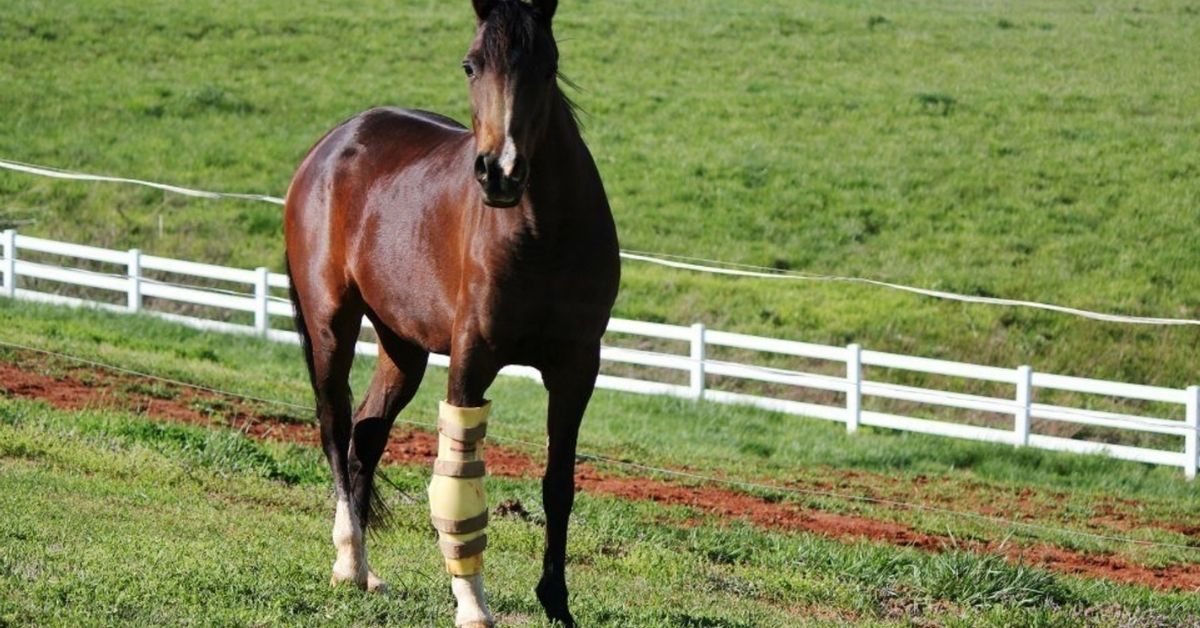 It depends on the broken bones of horses whether healing is possible. Unfortunately, healing is difficult when the fracture is on long bones.

The long bones found in the horse body are the radius, femur, tibia, or humerus. Hence, broken legs are a serious case among equines.

But you should know that horses have light legs for their body size. These broken body parts will likely shatter. There are 80 bones on a horse’s legs. They’re less than half the number of bones in an equine’s body.

These legs would usually bear 450 to 1,000 kg of weight. It’s the nature of a horse to move most of the time. Though broken legs mean a chance to rest, they can get pressure ulcers if they sit for days or weeks.

You should know that the horse’s hooves are vital in blood circulation. When this animal sits and doesn’t move, it has negative effects on its blood flow.

Healing can be a struggle. Surgery may heal a broken bone, and rehabilitation can help the horse recuperate. But there’s no guarantee that it can return to its normal state.

How long is a horse’s tailbone?

Who has more bones, a horse or a human?

Do all horses have the same amount of bones?

How many bones does a horse have in its leg?

There are 20 bones in a horse’s leg. Hence there are a total of 80 bones in all four legs.

How many bones does a baby horse have?

A baby horse has the same number of bones as an adult. It has around 205 bones, too, because it experiences endochondral ossification.

Endochondral ossification means that there’s body development among foals. Bone growth is under the scope of this process.

You learn the total number of an equine’s bones and their functions. It proves that these bones have a big contribution to the athleticism that horses show.

Despite the strength and advantages of these bones, they have weaknesses too. They can be the reason that a horse can get ill or sick. So, don’t let your horse experience excessive strain when engaging in an activity.