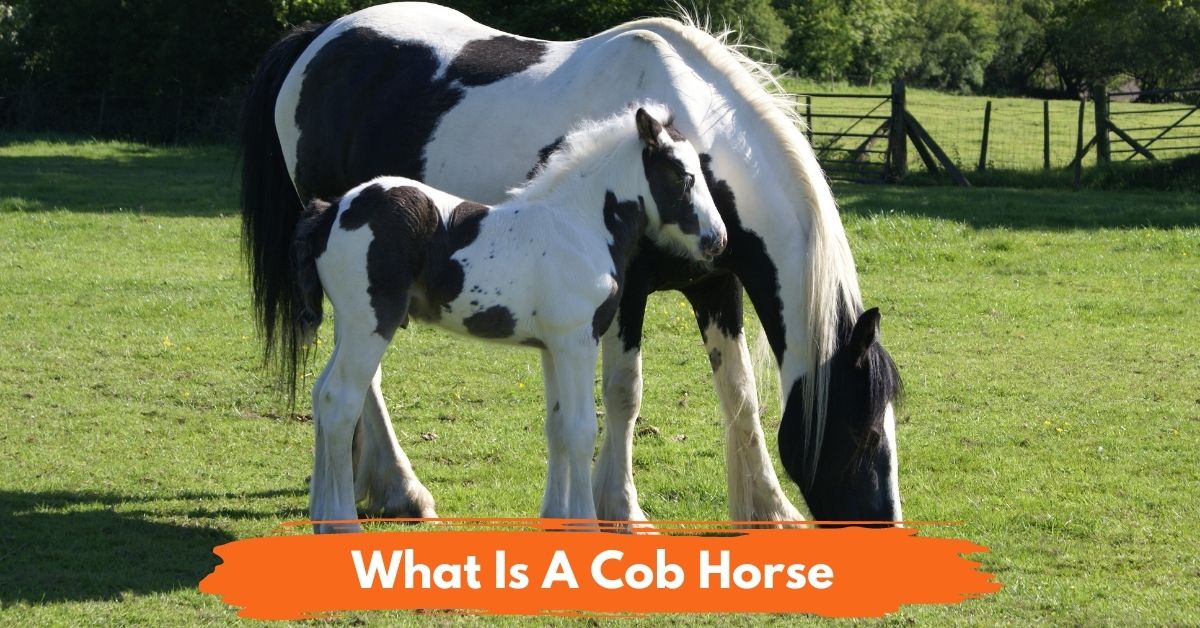 A cob horse has a muscular build and stout, strong legs. It’s like a large pony suitable for large riders. Despite its physical toughness, it’s a gentle creature.

There are several things that I like about cob horses. It gives you a comfortable ride due to their short, wide backs. Aside from giving someone a ride, they can also pull carts and wagons.

Cob horses have an attractive appearance too. They are in various colors, such as chestnut, brown, black, grey, and roan. Moreover, they have a beautiful flowing mane on their legs, tails, and above their heads.

You’ll find cob horses interesting once you know many things about them. So, please spare some time reading this article to understand them better. The information you can find here will fuel your curiosity and interest to see a cob horse face to face.

Where Does the Word ‘Cob’ Come From?

The word ‘cob’ comes from different etymologies, according to Wiktionary. The first origin is from the late 15th century or Middle English. ‘Cob’ means a ‘male swan’, ‘bully’, or ‘gang leader’.

These meanings state hardy characteristics that are the detailed descriptions of cob horses. It can also mean top, peak, summit, and head.

There’s round bread called ‘cob’, where the word ‘cobblestone’ comes from. Its roughness and hardiness also refer to the rugged build of cob horses. 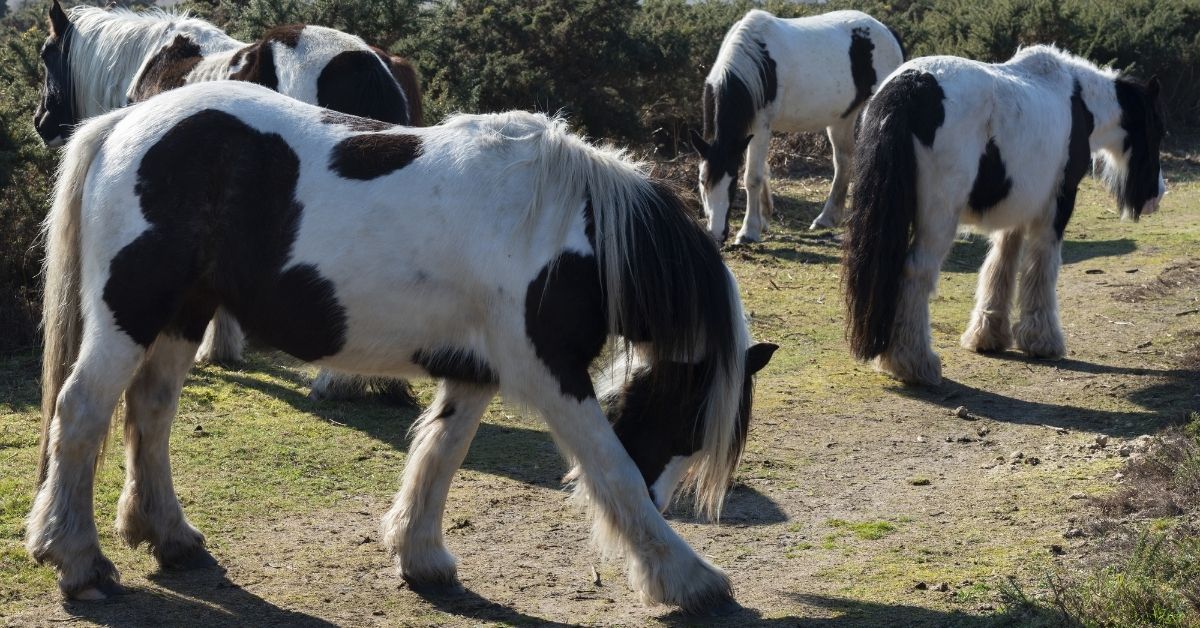 Is Cob Horse a Breed?

Cob horses are not a breed. Instead, it refers to a particular body type of a horse. Several species have the identity of a cob horse. Most draft crosses are cob horses.

Cob horses may look like a pony, but they’re the larger version. They stand 5 feet tall, while ponies are 4 to 4.6 feet tall.

These large ponies have a sturdy build with stout legs. They have solid joints and large bones. I also think they have a square figure but a reliable and steady gait.

To match their build, cob horses have heavy necks that arch. Their heads are thick too, and some have Roman noses.

What Size is a Cob Horse?

A cob horse is more significant than a pony. It has the appearance of a large pony, but it’s smaller than a regular horse.

Its height can start from around 4 feet to 5 feet or more. Cob horses have a stout profile. Also, they have short legs but large joints and stable disposition. They have strong bones, too, that enable them to carry loads even long distances.

What Are Cob Horses Used For?

It’s a common perception that cobs are versatile and talented. They can be in dressage and shows. There are cob competitions too. Participants are in different categories: lightweight, heavyweight, and Maxi cob.

You can also be in awe of their appearance in exhibitions after grooming. Cob horses are ideal for leisure riding too. You may also enjoy watching their jumping shows. They are fascinating creatures because of their overflowing tails, manes, and leg feathering.

They have heavy necks that arch, and some have Roman noses. A stocky build is a trademark of cob horses and short, strong legs.

The Most Common Cob Horse

You may know now the general distinction of cob horses. As mentioned, different breeds are cob horses. The description of the common ones is in this part. 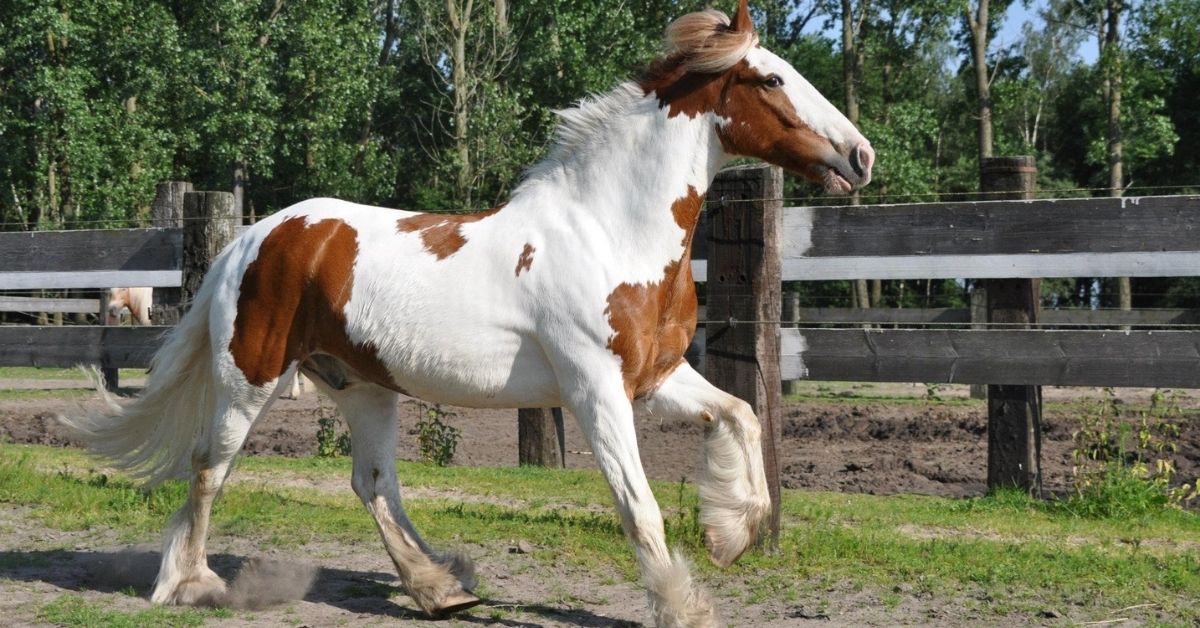 This cob horse has other names such as Traditional Gypsy cob, Gypsy cob, Gypsy Vanner, and Irish Tinker. It also hails from Ireland, Great Britain, and other parts of Europe. Hence, it has a connection with Irish travellers and English Romanichal travellers.

This horse has been a part of the long history of Ireland. But the official recognition of this breed happened in 1998. The sharing of this breed’s information was through verbal communication in the past. So it’s no wonder most cob horses are under the same classification.

Irish cob horses are in various colors. They can be in bay, black, brown, chestnut, grey, palomino, and roan. The white markings don’t include the underbelly, head, and legs. It’s called ‘colored’ when it has white markings.

The height of these horses won’t exceed 5.5 feet.

As a cob horse, it has a stout, robust build. It’s also known for its high knee action. The bone structure of Irish cob horses may differ because they can be medium or heavy.

An Irish cob horse has a straight, handsome face with a tight neck but not too short. Its head is proportionate to its body. This horse has a remarkable flow of mane on its legs, especially on the heavyweight ones. 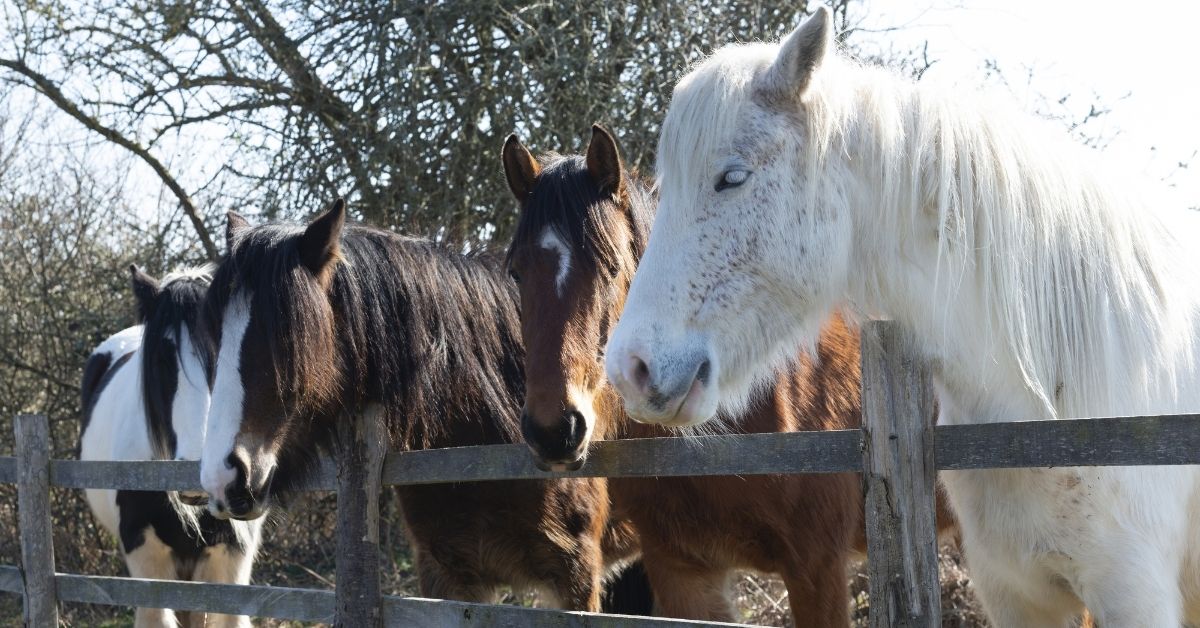 Gypsy cob horses have had the same role as the Irish cob horse in the past. They’re domestic horses native to Ireland and Great Britain islands.

People started to use Irish cob horses to pull caravans for traveling in 1850. This breed’s specification of color and look took place after World War II. In 1996, this breed’s official registration in the Traditional Gypsy Cob Association began.

A gypsy cob horse is usually piebald, but not all the time. A piebald horse has black and white patches. Other possibilities are a solid color and skewbald with white splashing. A skewbald horse refers to always having a white color combined with chestnut, bay, or brown.

Anyway, there’s no color specification for this breed standard. About registration, you have to state the color through British color terms.

The preferred height of Irish cob horses in the USA and Australia is from 4.3 to 5.3 feet. The standard in Ireland and Continental Europe can reach 5.5 feet.

The long mane on this horse’s legs is distinct. But there’s no strict guideline when processing for registration. It has a more refined head compared to other draft horses. A gypsy cob horse can have a straight, Roman, or crooked nose.

It has a strong, muscular neck and chest. This breed has heavy bones that promise strength and power. You can also identify this horse through its gait, which is precise, supple, and powerful. 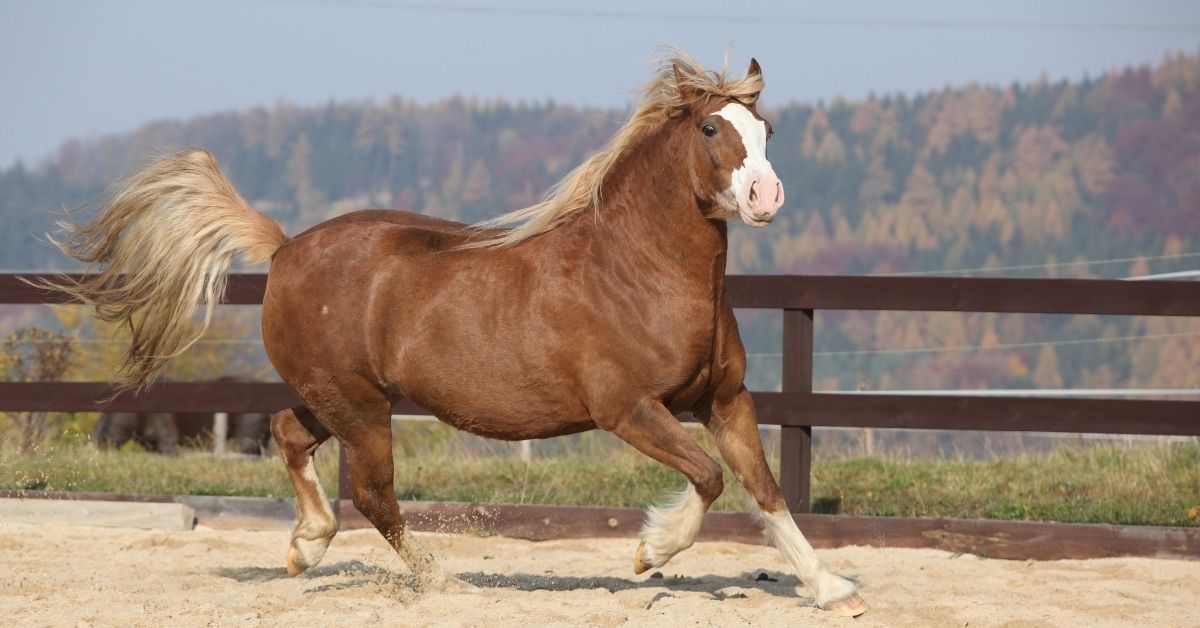 The Welsh cob horse, or Section D, is the largest among the Welsh breeds. Aside from the size, this is an impressive breed due to its exceptional abilities. People don’t only applaud its load-carrying capacity but its agility as well.

This cob horse came from Welsh ponies. The earliest record of its existence is as early as 1600 BC. In the earliest time, Welsh cob horses worked in mines and served the Welsh military. But it’s in harness driving and under saddle in the present.

In the UK, the foundation of the Welsh Pony and Cob Society surfaced in 1901. The inclusion of Welsh cob in society took place in the 1960s.

The Welsh cobs can be bay, black, chestnut, and grey. Some of them have palomino and buckskin colors. But the grey color is the least common. You can find some with white markings.

The height of Welsh cob horses won’t be above 4.7 feet. But there’s no limit when you register one.

A Welsh cob is a sturdy horse despite the prominent pony characteristics. You can’t deny that its head and leg proportions resemble a pony. 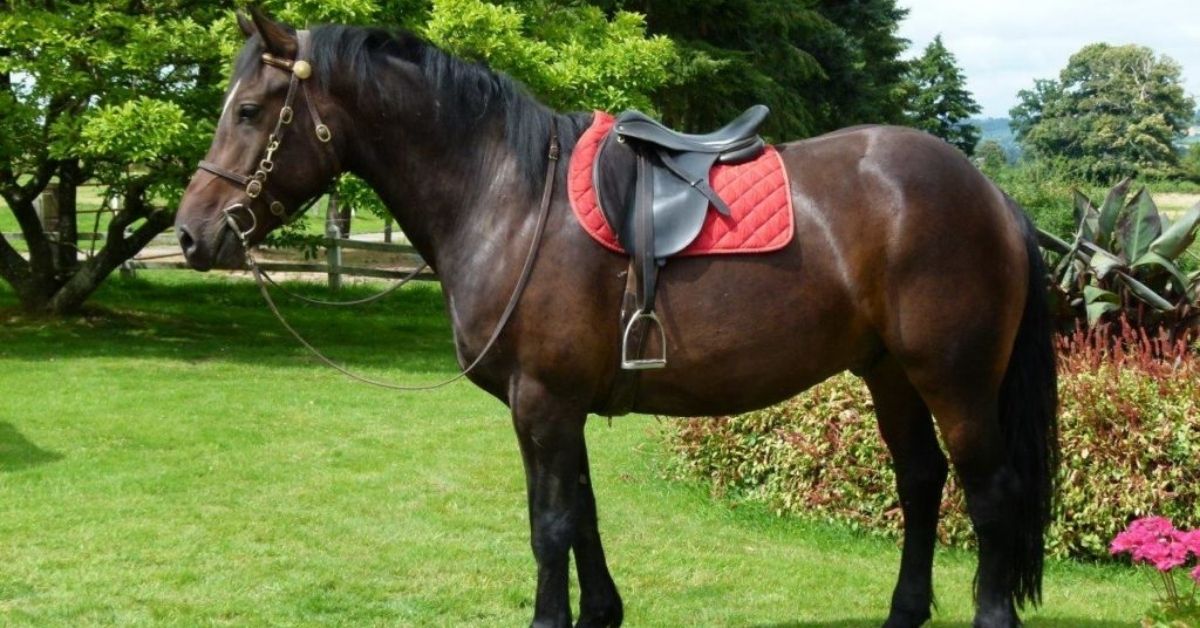 This cob horse comes from Normandy, France. It looks like a Thoroughbred cross instead of a French draught breed. It’s a hardy, big-bones horse but lighter than expected.

In the past, armored knights mounted and rode Norman cob horses. These equines pulled their artillery too. They’re also valuable for farming and long-distance travel.

Humans still revere these horses nowadays. They serve various purposes, such as farming, hunting, and versatile riding. Thanks to their smooth paces, speed, and stamina!

The colors of Norman cob horses are bay, chestnut, and seal brown.

This cob horse has the look of elegance with its well-proportioned head. It has a stocky, compact build with a deep chest and broad, angled shoulders. Moreover, it has a strong back.

Norman cob horses’ strong, muscular legs are short, like most draught horses. But they’re not too heavy. Thus, they have the description of lighter cob horses. They have shorter manes, unlike other cob-horse breeds.

How Much is a Cob Horse?

You might have figured out that you’ve already seen a cob horse in person. It has a muscular build with shorter legs. It has a notable tail, mane, and hair around its legs. So they appear as mystical and beautiful creatures.

The distinction of different breeds of cob horses only took place in recent times. But it can still confuse you. There’s no specific classification of color and height for a particular breed. That’s why you must take time to get to know the common species well.