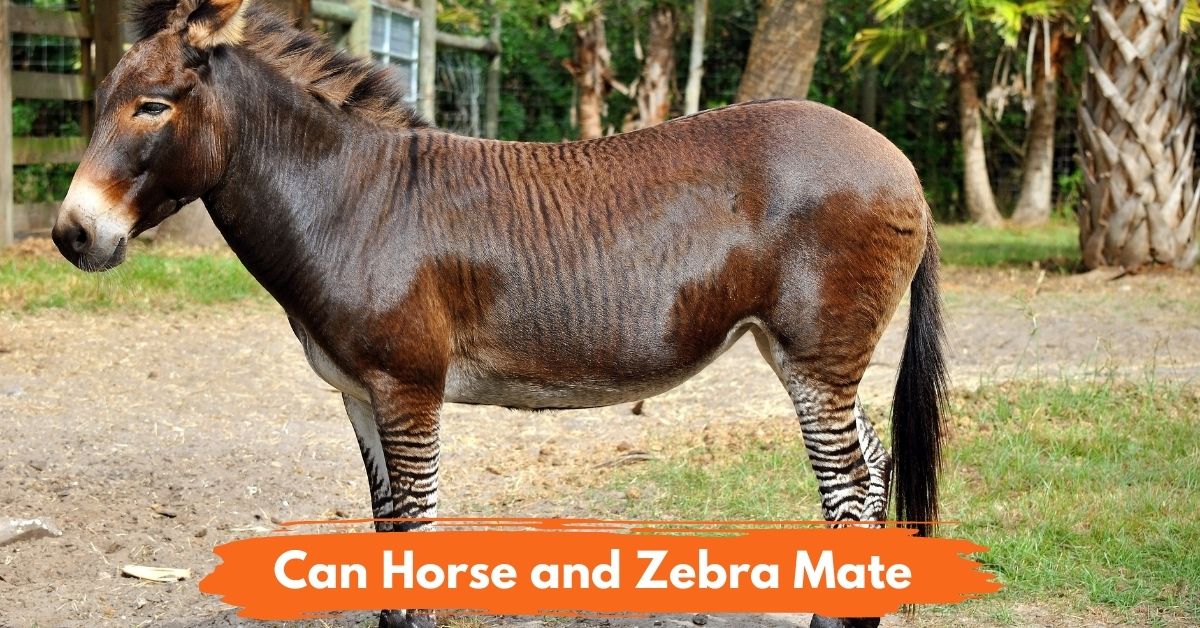 Believe it or not, a horse and a zebra can mate. These animals can produce offspring called zebroid! It’s a hybrid that takes after a horse’s body with the stripes of a zebra.

You may wonder why it’s possible, as horses and zebras are different species. But you should know that they both belong to the Equid family. Due to the same genetics, these animals can have offspring.

The earliest record of zebroids is in 1815. Later, Professor Ewart of Edinburgh Natural History became interested in these hybrids. He then linked the process to the theory of telegony.

These hybrids are also in the book of the infamous Charles Darwin. There are four colored drawings of them in ‘The Origin of Species. In the 21st century, zebroids are in series, movies, and books.

Hybrids like zebroids are fascinating, but reproduction is not always successful. Know more about horses and zebras to understand how they can create offspring. Also, you would know why they may fail. This article will discuss the notable factors for you.

Contents show
1 What is The Difference Between a Zebra and a Horse
1.1 Color
1.2 Size and Body Structure
1.3 Fur and Mane
1.4 Temperament and Personality
1.5 Speed
2 Can Horses Mate With Zebras
2.1 Zebra Stallion and Horse Mare
2.2 Horse Stallion and Zebra Mare
2.3 Zebra and Draft Horse
3 Can a Horse and a Zebra Have a Baby?
4 What is a Zebra and a Horse Mixed Called?
5 What Does a Zorse Look Like?
6 Can a Zorse Reproduce?
7 Can You Ride Zorse?
8 Conclusion

What is The Difference Between a Zebra and a Horse

Despite differences, it’s incredible how a zebra and a horse can have offspring. You can detect some of them with a single look. But let’s be thorough and discuss each of them. 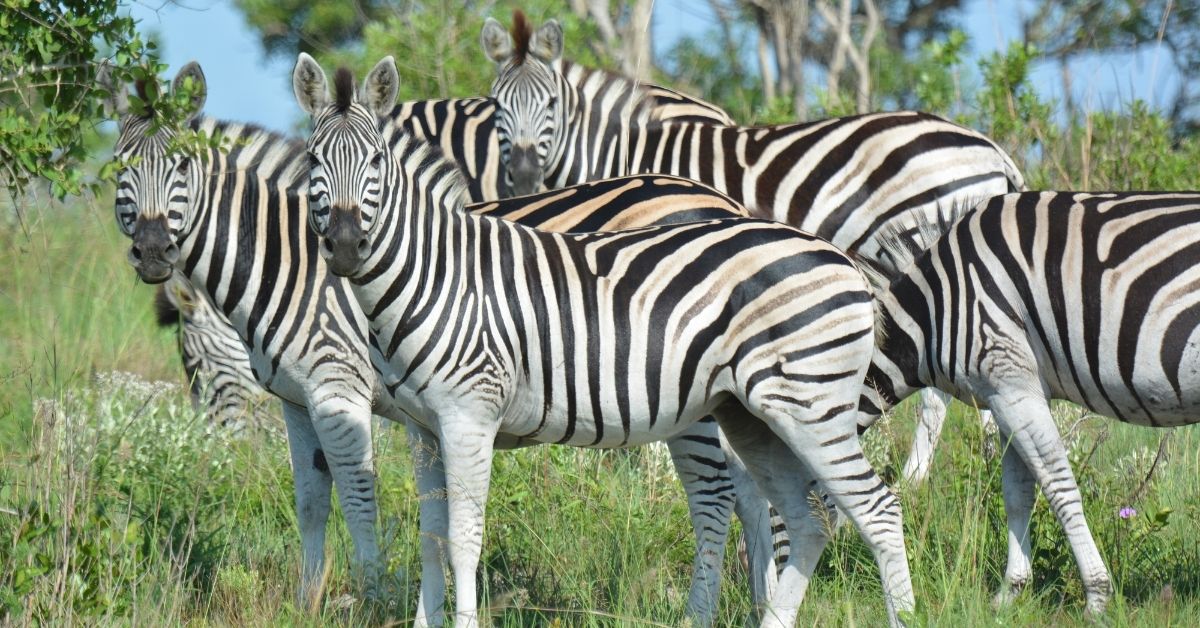 The color difference is easy to spot between zebras and horses. The black and white stripes around the zebra’s body are unique for this species. These stripes are not only for aesthetics but for protection.

The stripes on zebras help them camouflage from predators. When an animal of prey sees a herd of zebras, it’s challenging to pick one of them due to the stripes. So, it won’t be easy to snatch the young zebra. Stripes also hinder bugs from bothering zebras.

In the case of horses, they are in various colors due to combining different genetics. But the color origins are black and red. Thus, it makes sense that black horses don’t have a red base.

Horses that have red bases can be in colors of chestnut, cremello, palomino, red dun, red roan, and sorrel. Those with black bases have shades of black, blue and bay roan, bay, brown, buckskin, grullo, and perlino. You can determine the color base on the horse’s mane, ears, legs, and tail.

Dilution of colors occurs as well. So, you can find horses in shades of champagne, cream, dun, pearl, and silver. These five light colors convert into different effects and colors. Also, some horses can have white markings too.

You may think zebras and horses have the same size and body structure. It happens because their bodies can be deceiving. An average horse is larger than a zebra.

The height of horses is around 180 cm, while zebras stand from 120 to 150 cm. Due to their smaller size, zebras’ appearance resembles donkeys.

Zebras are lighter than horses because they’re smaller. The weight of the male ones is from 700 to 900 pounds. Female zebras weigh 400 to 570 pounds. A newborn zebra is around 65 pounds. 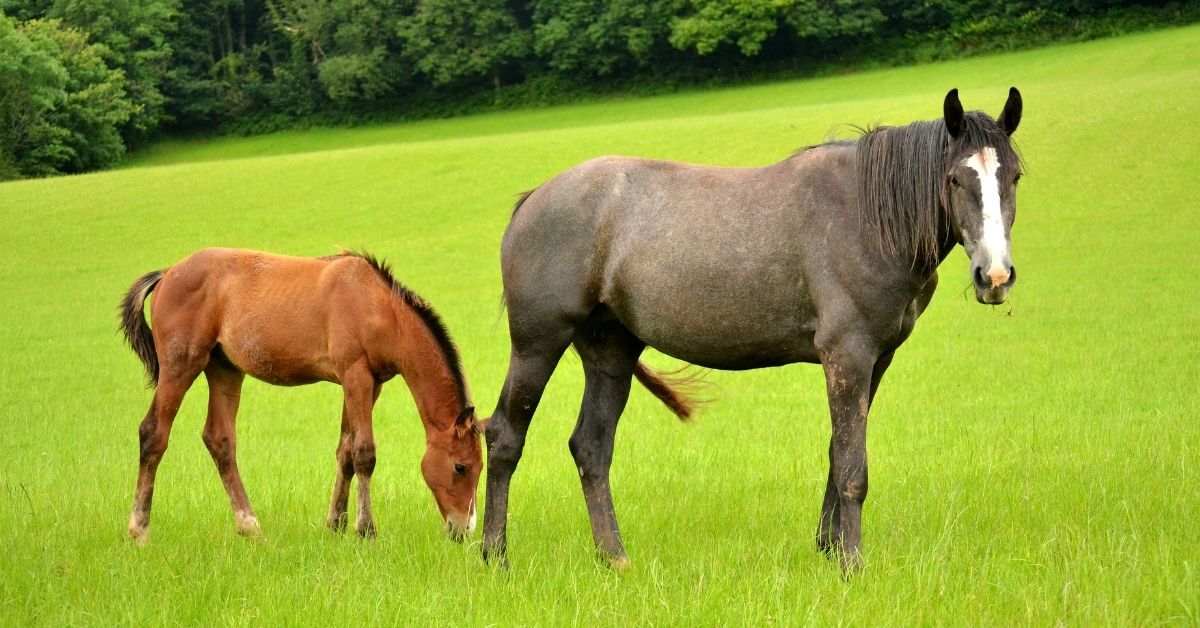 Zebras have short, straight, and pointy fur on their heads. If you wonder, because this animal has black skin, the stripes are all fur. The long, flowing manes on their heads make horses look stunning.

Zebras and horses differ in temperament and personality as well. The size of a horse can be intimidating to some. There may be a scary thought that they can kick you out of nowhere. You may prefer mingling with zebras as they seem adorable with those striped bodies.

But you should know the actual score, especially if you haven’t met both animals. Would you believe that zebras are more aggressive than horses? Most zebras are in the wild, and predators are around them. So, you can’t blame them for always being in defense, as there’s always an imminent danger.

Zebras can execute a strong kick by using their powerful hind legs. Some of them use it to assert their dominance in their herds. Their kick is strong enough to knock down a predator like a lion.

If a zebra feels threatened, it can also kick a human. So, never try to pet, and worse, ride a zebra. The reason why horses are not as aggressive as zebras is domestication. They’ve been helpful to humans since the earliest times.

Remember that horses can still attack some people when they sense danger. Wild horses will usually do it, but it’s a rare occurrence. Horses under human supervision are more comfortable with the presence of humans. Still, you must know how to handle them, or an expert can guide you. 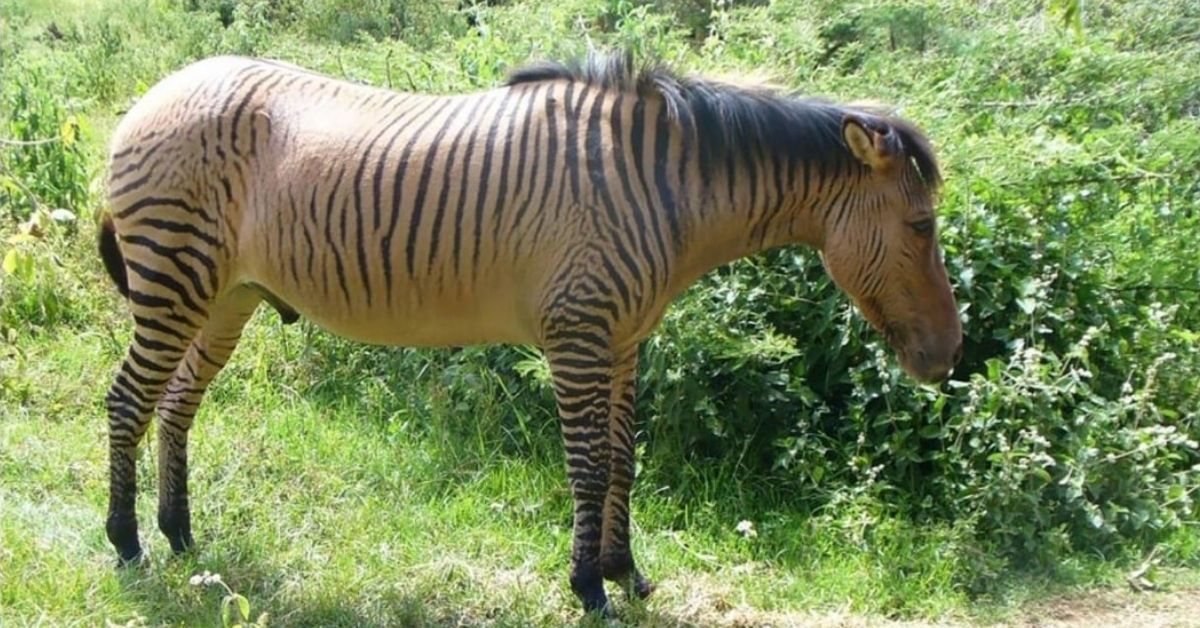 Zebras are in the wild, so they must hone their running skills. Humans didn’t only train horses as race animals. But they were the dependable transport at the time when there were no cars.

Horses gallop at an average speed of 40 to 48 km per hour. Yet, they can speed up to 70 km per hour. For survival, zebras can run 60 to 70 km per hour when they try their best to escape from their predators. As you can see, running for safety can be almost the same as the result of training.

Can Horses Mate With Zebras

The answer to this question is yes! Horses and zebras belong to the same Equidae family and subgenus Equus. Different gender pairings can mate. But having offspring is not always a guarantee.

As long as the height is not a restriction, zebra stallions and horse mares can mate. In fact, this is the most successful pairing. The desired result needs human intervention. In particular, zebras and horses are not attracted to each other. 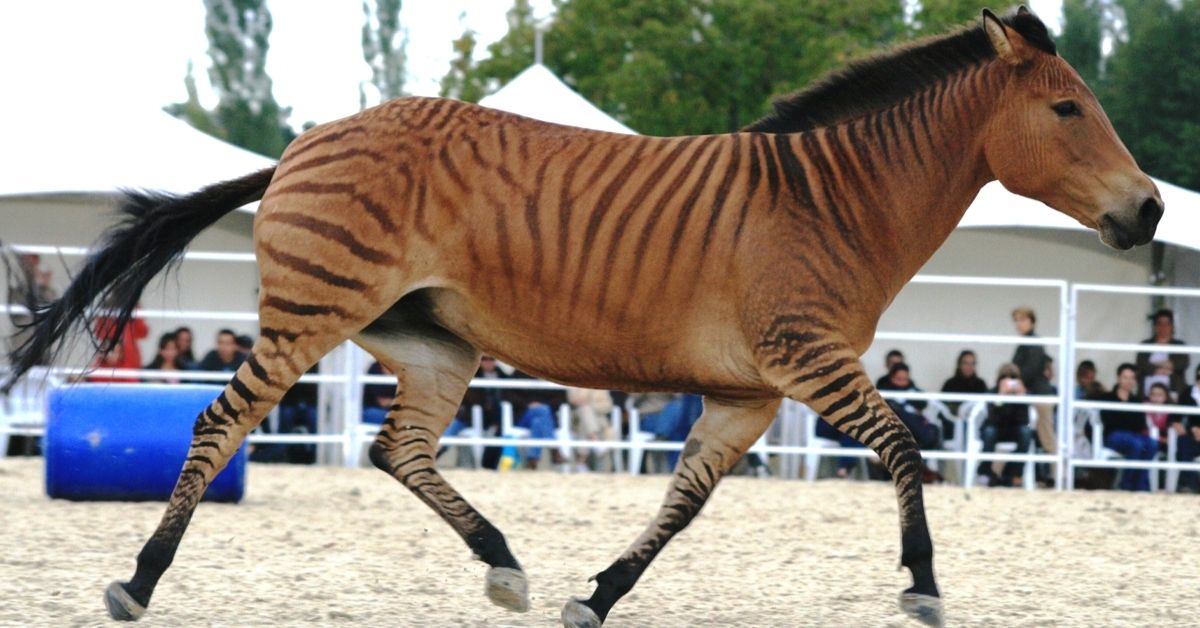 This pair is a rare chance, and it also needs human intervention. Horse stallions and zebra mares can mate, but the opportunity is low.

Yes, a zebra and a draft horse can mate. But the sole option is through artificial insemination conducted by a licensed vet.

Can a Horse and a Zebra Have a Baby?

A horse and a zebra can have a baby. It happens because of the fusion and splitting of equid chromosomes during evolution. As mentioned, horses and zebras are both equids.

To achieve a hybrid baby, a horse and a zebra must be in captivity. They can mate by themselves, but human intervention is necessary most of the time. It can happen in the wild if you base it on genetics, but these animals don’t have an amicable relationship. 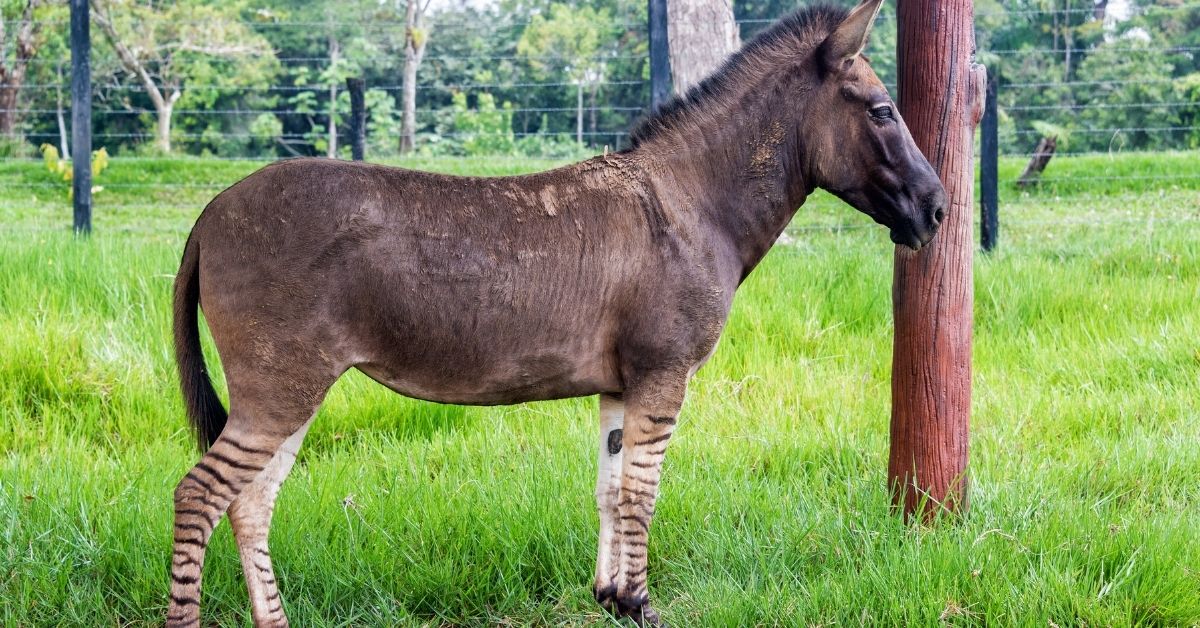 What is a Zebra and a Horse Mixed Called?

I mentioned several names to call a hybrid of a zebra and a horse. But the general term is zebroid. Due to the variety of colors and patterns, there are different terms to refer to zebroids.

A zorse has a horse’s body frame and color with stripes on its leg, neck, and back. So, the stripes don’t cover the whole body. There are varieties of color combinations.

Can a Zorse Reproduce?

Unfortunately, zorse can’t reproduce. Male zorses are sterile, and their female counterparts are infertile. It happens because of chromosome malfunction. 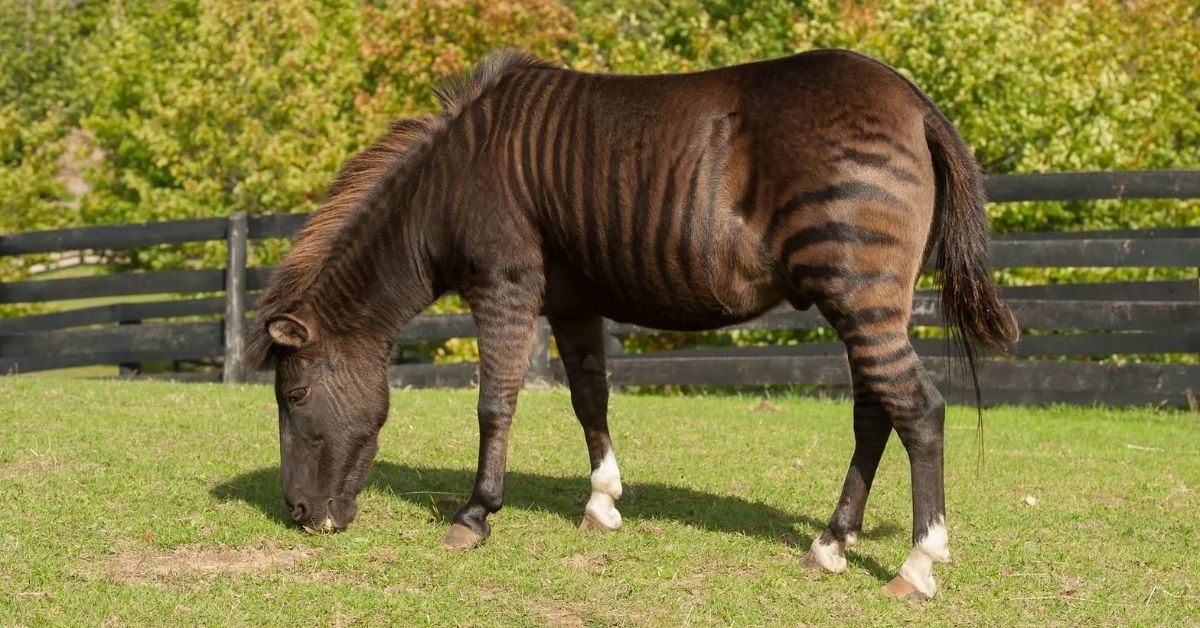 Can You Ride Zorse?

You can ride a horse because it’s not difficult to handle and train. It’s safe to say that its behaviors are almost the same as the domesticated horse. You may find some temperamental zorses but not as bad as the zebras in the wild.

Don’t worry, as there is training for zorses to give rides. They will be able to have a grasp of their purpose by learning from a patient trainer.

The hybrid takes after the horse body with stripes from the zebra. This creature has an attractive appearance. Sad to say, it can’t produce its own offspring due to the malfunction of chromosomes.