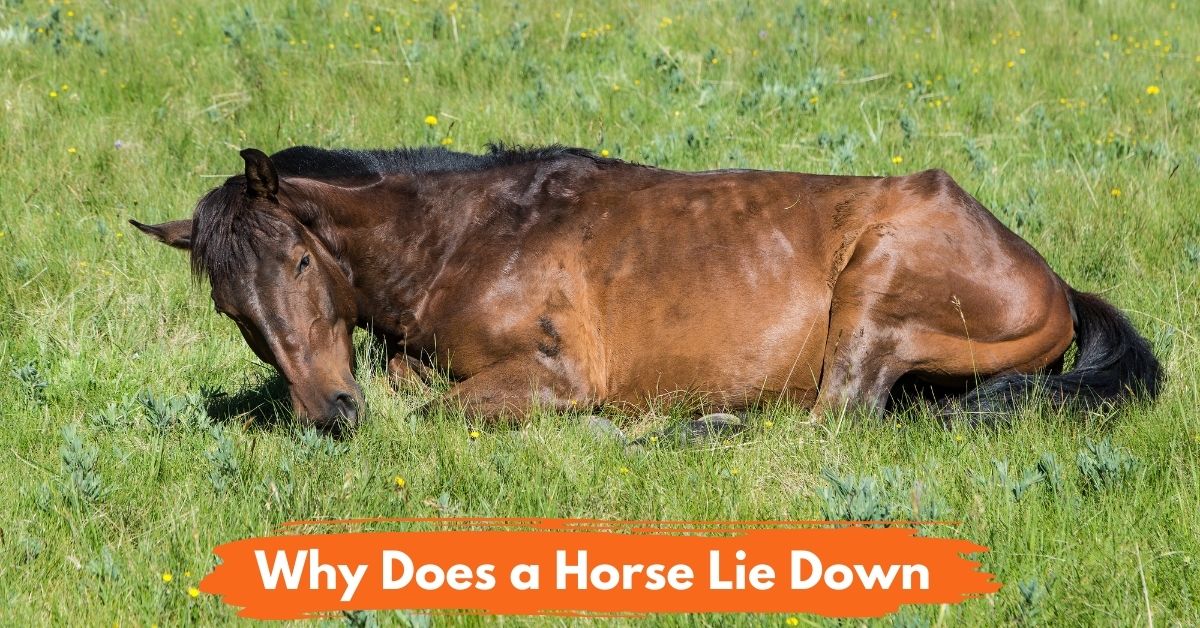 Have you ever seen a horse lie down? There’s a common myth that horses are unable to lie down. But the truth is that they can. Although it is normal for horses to lie down, it is alarming if they do it more often.

You may see horses standing most of the time even when they’re in their stable. As prey animals, it makes sense as they must not allow themselves to be vulnerable to attacks. With their heavy bodies, they can’t quickly get up from lying down to escape predation. Still, a horse lies down from time to time.

There are three reasons a horse would lie down: to rest, during deep sleep, or because they’re sick.

Contents show
1 To Rest
2 During Deep Sleep
3 Sickness
3.1 Colic
3.2 Narcolepsy
3.3 EPSM (Equine Polysaccharide Storage Myopathy)
4 Conclusion
5 Frequently Asked Questions
5.1 Do Horses Lie Down When Sleeping?
5.2 Is It Safe For Horses To Lie Down?
5.3 What Are The Sleeping Habits Of Horses?
5.4 Is The Horse Sick When It Lies Down?
5.5 How Long Can Horses Lie Down?
5.6 What’s The Best Sleeping Position For Horses?
5.7 Do Horses Dream?

Horses are known as working animals. They’ve been used for transportation, agriculture, and war for centuries. And even though they’re not used as much for these purposes anymore, they’re still bred and trained for work.

This means they need to rest like any other animal or person doing physical labor. When taking a break, horses usually sleep while standing up. Because of the stay apparatus, the horse can relax and sleep without fear of falling. 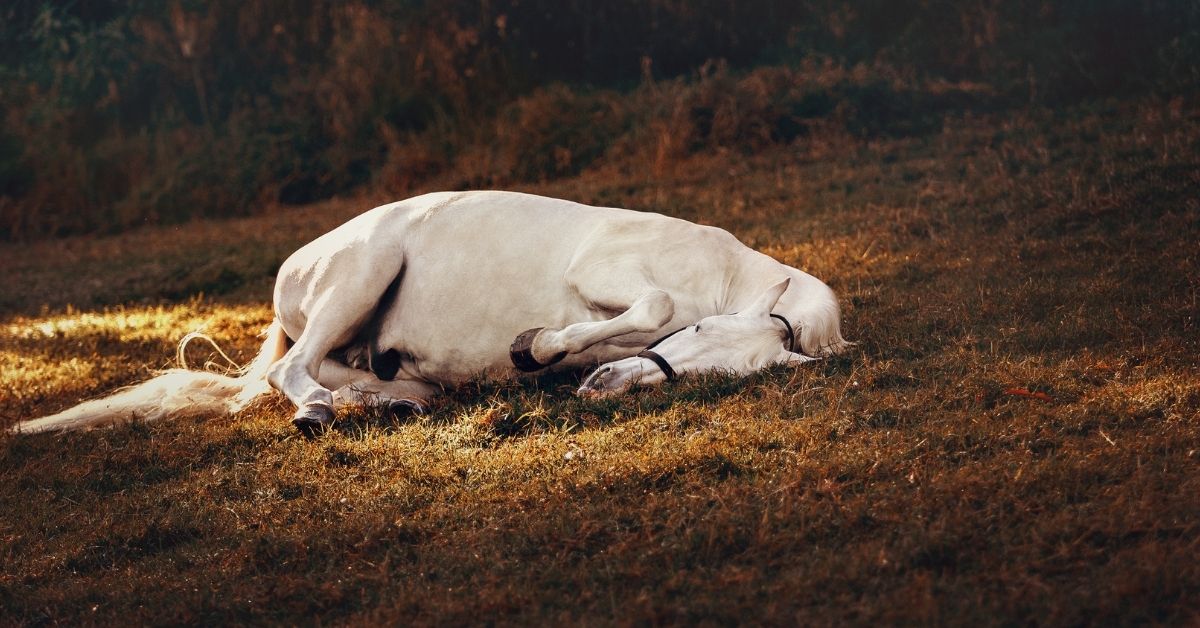 Though horses usually sleep standing up, they do enter a period of deep sleep each day. However, they can only achieve this by lying down when sleeping. When lying down, the horse can enter what’s known as REM(Rapid Eye Movement) sleep, the deepest sleep level.

Like humans, REM sleep is essential to horses as it helps them restore their energy levels and repair any damage to their muscles or joints. It’s also thought to be necessary for their emotional well-being. However, because they need to lie down to enter REM sleep, horses usually only achieve this state for a short period each day.

According to Sheryl S. King, the head of the equine science program at Southern Illinois University, horses don’t sleep a lot. They don’t lie down for a long period either. When a horse has been lying for a longer period than normal, it could be one of the symptoms of an illness.

A colic is a severe abdominal pain that can afflict a horse due to its anatomy. As a large animal, it’s not surprising that it has intestines that are a total of 100 feet long. These intestines float so they’re prone to displacement and tangling which lead to abdominal pain.

Apart from the intestines, other causes of colic are overfeeding, indigestion from mold hay or feed, and sudden change in diet. Thus, you have to look closely at the food that you give to horses. There are several symptoms of colic and one of them is when a horse unexpectedly lies down more often than usual.

A horse with colic will also lie down and get up abruptly. Then, lie down again and these repetitive actions become a cycle. As you can imagine, the discomfort of abdominal pain can make a horse restless. The horse may keep on looking at its sides and roll violently. 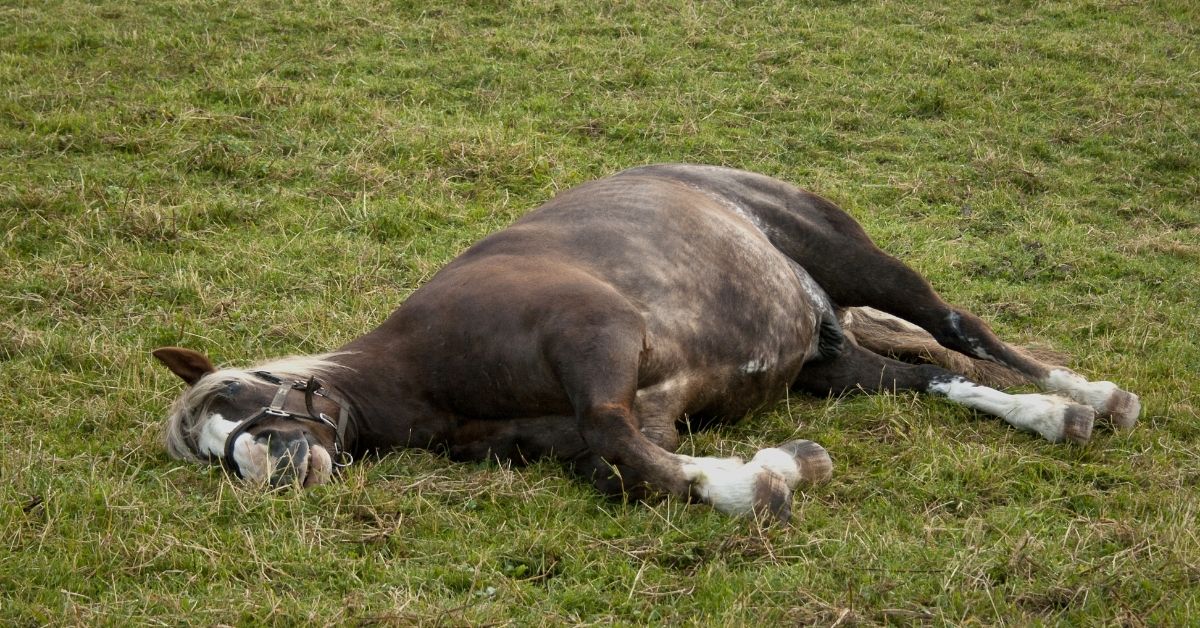 This is a sleeping disorder if a horse fails to get the REM sleep. You may find it lying down when it collapses. Hence, it’s important to do some observations whether the horse lies down by itself or it just passes out all of the sudden.

When a horse suffers from narcolepsy, it frequently places its head and hind legs on fences and other things. Surprisingly, it will sway and stumble without reason.

EPSM is a metabolic disease that builds up excessive muscle glycogen and an irregular amount of polysaccharides found in skeletal muscles. A horse with this condition is typically heavily muscled but it’s composed.

Horses with EPSM are not inclined to move, especially at a high speed. The reluctance becomes worse in a severe case because they won’t even take a single step. It prefers lying down most of the time to avoid any exercises.

In most scenarios, a horse lying down flat is considered normal behavior. In most cases, there’s nothing to worry about when your horse does this. For example, horses will lie down to rest and unwind after a long day of work or when they are going into a deep sleep.

Despite this, horses aren’t accustomed to lying down and are mostly seen resting while standing up. So, if you notice your horse lying down more often and exhibiting other strange behaviors, contact an equine vet to be on the safe side.

Do Horses Lie Down When Sleeping?

Horses can take a nap or sleep standing up, but if they want a good rest, they lie down when they sleep deeply and comfortably. You must be vigilant if your horse is lying down a few times more than average. Check for injuries or physical discomfort that could prevent them from standing longer.

Is It Safe For Horses To Lie Down? 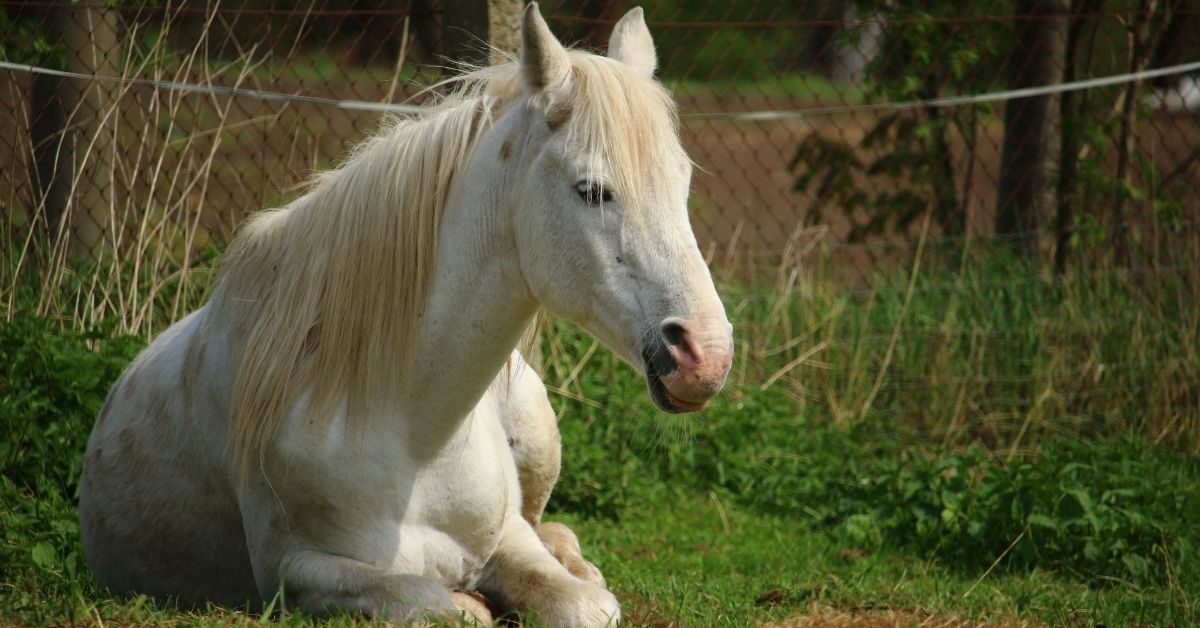 Yes, it’s perfectly safe and regular for horses to lie down from time to time. It can be beneficial for their health as it allows them to relax their muscles and joints fully.

As long as they don’t stay in this position for too long, there’s no need to worry about your horse lying down. The problem lies when they do it excessively. Horses, like other large animals, are not accustomed to prolonged lying as it can potentially put a strain on their internal organs.

In addition, horses can develop sores on their joints from remaining in the lying position for too long. For these reasons, let your horse lie down for short periods rather than extended ones.

What Are The Sleeping Habits Of Horses?

Horses sleep 2.5 to 5 hours daily and 80% is done by standing. They don’t sleep standing all the time because they need at least 30 minutes of recumbency or lying down. It’s essential to achieve the full cycle of sleep. If a horse fails to do it, the animal will suffer from narcolepsy, a sleeping disorder.

The sleeping time of horses is from midnight until 4 am. Sleep duration varies as it’s affected by factors such as environment, space allowance, lighting, bedding, and lying area.

Is The Horse Sick When It Lies Down?

Not necessarily as a horse needs to lie down to get the complete sleep cycle. Lying down at unusual times and patterns is only one of the symptoms of an illness. Other symptoms displayed by a sick horse are losing appetite, weakness, and restlessness like scratching the ground.

How Long Can Horses Lie Down?

Although horses can lie down for as long as they need to, the reality is that they shouldn’t stay in this position for excessive periods. The reason is that a horse’s body isn’t structured to remain in this position for long, and they can develop what’s known as “sore hock” from extended lying. This condition refers to the horse’s joints becoming sore, which can be quite painful.

In addition, the internal organs of a horse tend to experience intense pressure when the animal is lying flat on the ground. This can cause problems with digestion, and it can also put a strain on the horse’s heart and lungs.

In the worst possible case, a horse can die if it cannot get up for a few days. For these reasons, a horse can lie down for no more than 3 hours.

The best sleeping position for horses is lying on their side with their legs extended. This allows them to relax and take the pressure off their large body.

In addition, this position helps prevent sores from developing on the horse’s joints as they’re not resting all their weight on them. If you see your horse lying down, this is generally the position they’ll be in.

It’s not clear whether horses dream, but it’s possible. When horses sleep, their brains go through cycles similar to human sleep cycles. This means that they experience both light and deep sleep.

According to studies, movement during sleep, such as swiveling ears or kicking legs, indicate that the horse has something on its mind while they’re dozing. Whether or not this is an actual dream is difficult to say, but it’s certainly plausible.