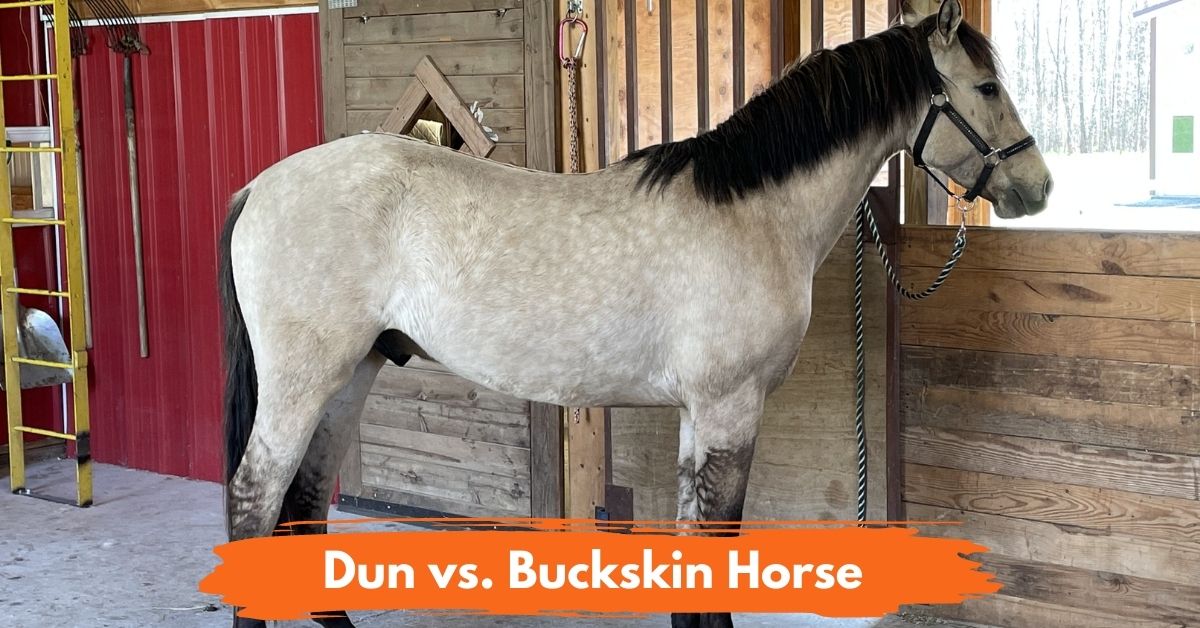 Buckskin vs. Dun Horse, what’s the difference? Buckskins have a tan color with a stripe on their back and black points at some areas of their body. Meanwhile, Dun horses feature crisp back stripes with primitive markings over its body.

Many people tend to confuse both buckskin and dun horses. After all, they look very similar. But, some distinct differences separate both equine species.

If you’re wondering what these distinctions are, let’s take a closer look at buckskin and dun horse. The following topics will shed some light and determine how both differ from each other.

What is a Buckskin Horse?

A buckskin horse is a type of horse coat color. This color resembles a tan shade, like deerskin—hence the name “Buckskin.” 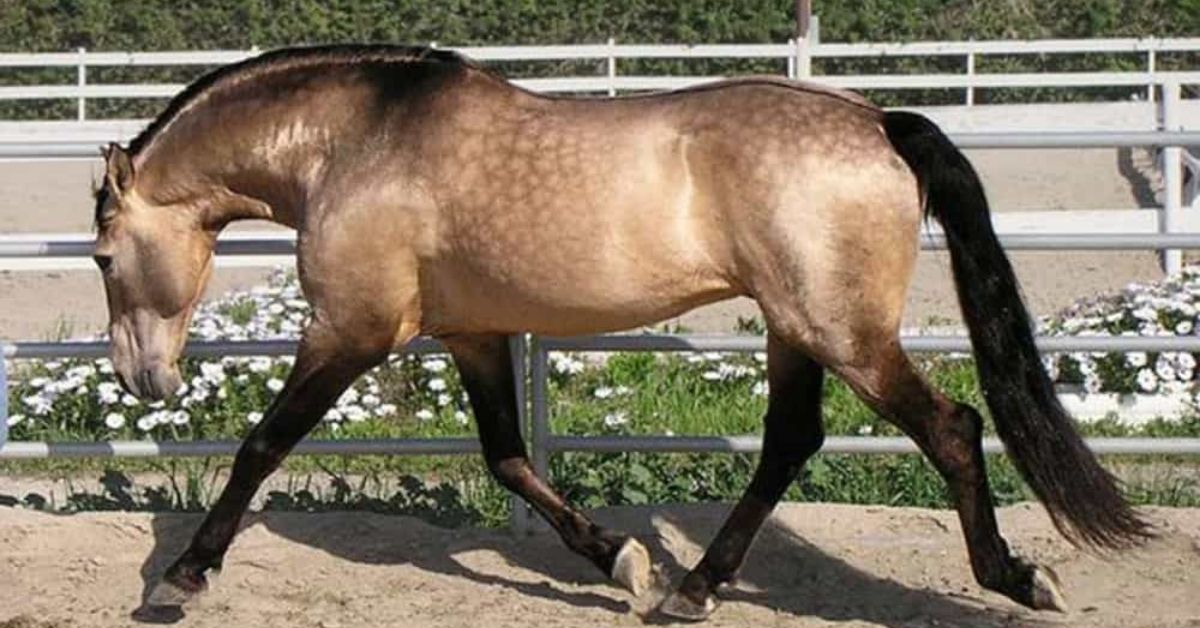 The Buckskin horse features either a tan or gold coat color with black points in its body. These black points include the tips of its mane, tail, and lower legs.

This coat color results from the cream dilution gene that acts on a bay horse. This means that buckskins are usually born with a black coat, which lightens as they age.

What is a Dun Horse?

A dun horse derives from the same bay horse base coat as the buckskin. The difference is that dun horses feature the dun gene. This gene is a dilution gene that affects red and black pigments in the coat color of a horse. This color combination gives the horse a sandy brown coat.

The dun gene results in the body of this type of horse lightening. Meanwhile, the other details are the same shade as the undiluted base coat color. These details include the legs, tail, mane, and primitive markings. 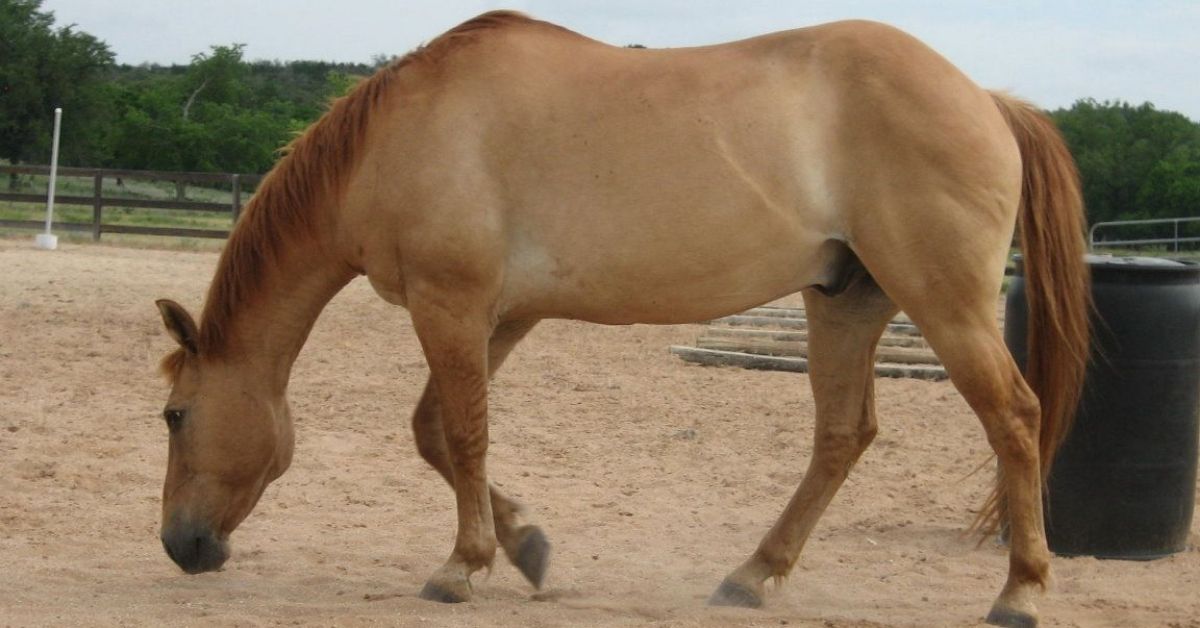 That means a dun horse doesn’t always have black points like a buckskin. Instead, the color of its markings and other key areas depends on the horse’s base coat color.

Genetic Difference Between a Dun and Buckskin Horse

At this point, you already know that both Dun and Buckskin horses derive from the same bay base coat color. The main difference lies between their genetic makeup.

The difference between both coat colors is their pigment dilution. This factor handles their coat colors which and derives from two separate genes. Buckskin horses result from the cream gene.

The dun dilution also produces dark stripes across the horse’s shoulders. It also features the same stripes on its back and across its legs.

Horse genetics is the same as human genetics. Some genes tend to be more dominant than the others. That means for a Buckskin or a Dun to exist, only one parent needs to pass down the Dun or Cream gene. 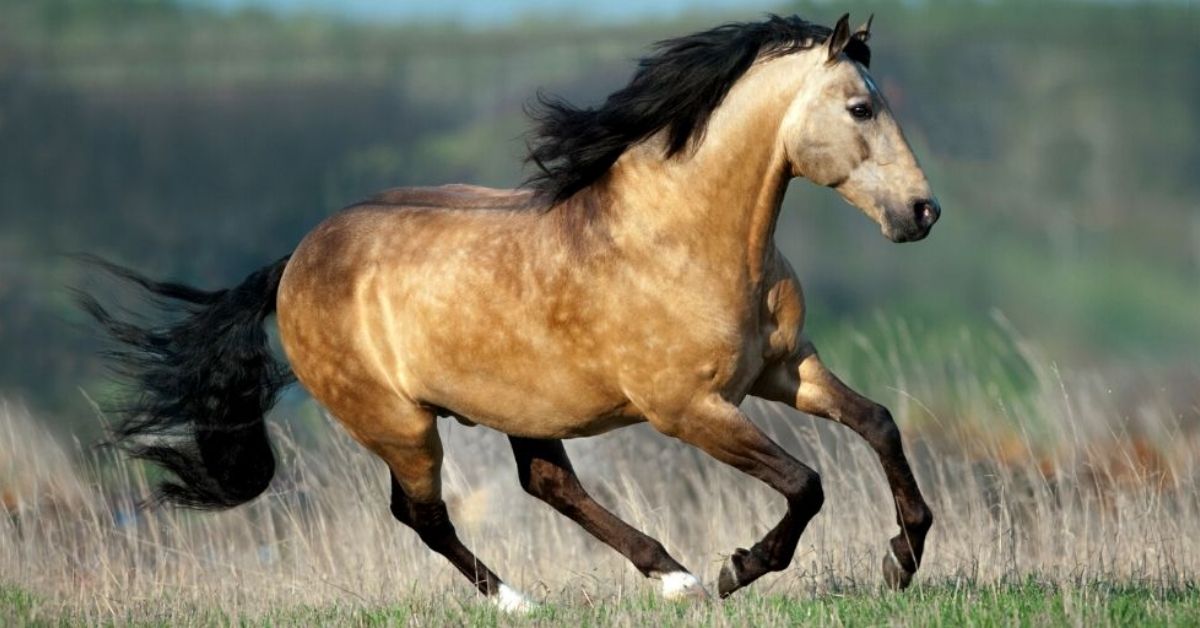 But if both parents have the gene for buckskin or dun, the chances of the foal having either coat increases.

Coat and Pattern Differences Between a Dun and Buckskin Horse

When you place a buckskin and a bay dun horse side by side, it’s easy to see why they get mistaken for one another. While they may seem similar at first glance, you’ll be able to see several differences between their coats and the patterns all over their bodies.

Here are some important factors that will help you differentiate a buckskin from a dun by looking at the patterns on their bodies:

a dun horse has a visible stripe on its back while a buckskin horse doesn’t. The dorsal stripe is an almost universal pattern for all bay dun horses. It’s the most telling indication that a horse carries the dun gene.

Another unique pattern of a dun horse is the visible zebra-like stripes on its legs. However, there are times when this pattern is rather faint and unnoticeable.

Buckskin horses, on the other hand, don’t have zebra stripes on their legs. Instead, it’s common for them to have freckles or small spots on their lower legs.

It’s the least common of the primitive markings that are present in a dun horse’s body. However, if this mark is present, it’s a very telling sign that a horse is carrying the dun gene.

Buckskin horses, on the other hand, don’t feature stripes on their shoulder blades.

Even if a dun horse has dark hair, there will always be the presence of lighter hairs on its mane and tail. This phenomenon is known as “frosting.”

Buckskin horses, on the other hand, will always have a single-color mane and tail. So if your horse has a dark mane and tail without the presence of light hairs, your horse possesses the buckskin gene.

The bottom line is that dun horses will have noticeable primitive markings all over their bodies while buckskin horses don’t. 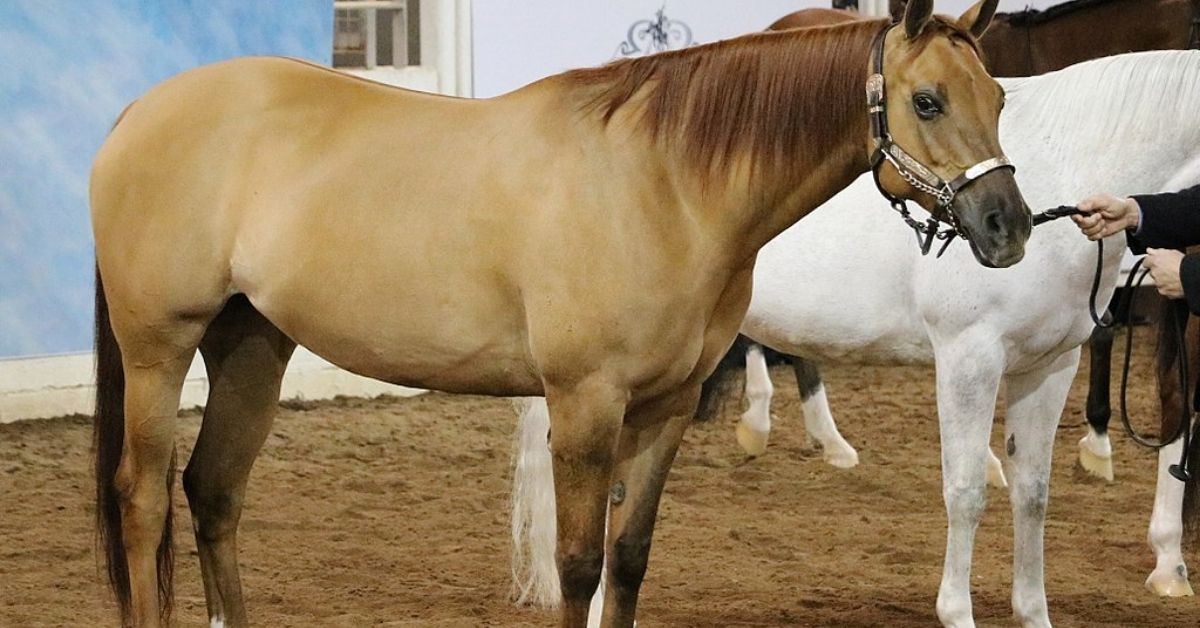 However, Keep in mind that there are instances where the primitive markings are misleading. There are cases when primitive marketing is also present in non-dun horses, which is where the confusion comes in.

Fortunately, there’s an explanation to it: some non-dun horses like buckskin may have a mutation of the dun gene, known as “nd1.” This mutation means while the horse doesn’t carry the dun gene, it may display subtle primitive markings that are similar to that of a dun horse.

It can confuse people to believe that these horses are also dun. However, they’re not and here’s the telling factor:

Both factors are the most effective way to tell them apart. So if you ever come across a horse that you can’t quite decide if it’s a dun or buckskin, look for these two factors to give you a clue.

Buckskin horses, on the other hand, don’t have primitive markings. In its place are what’s known as “black points.”

Black points: These are the dark-colored hairs that you see on the muzzle, eyes, mane, and tail of a buckskin horse. The rest of its body is a light tan or gold color, with the black points providing a stark contrast.

To put it simply, a buckskin horse is a bay horse with a cream gene mutation. This is what gives the buckskin its light-colored body and black points.

Got some more questions about buckskin vs. dun horses? This section has you covered!

Can a Buckskin Be a Dun?

No, a buckskin cannot be a dun. As mentioned earlier, buckskins are their unique coat color. It’s the result from the cream gene diluting a bay horse’s coat.

Meanwhile, Duns have the dun gene, which dilutes both red and black pigments in the coat.

This distinction disqualifies any horse that’s buckskin from being dun. But keep in mind that a buckskin horse can carry the dun gene, which means their offspring could be dun. This is because the dun gene is more dominant than the cream gene.

Is Spirit a Buckskin or a Dun?

The horse named Spirit from the popular Dreamworks movie is actually a dun. In the film, Spirit has a sandy brown coat with a crisp dorsal stripe. He also has primitive markings on his legs. 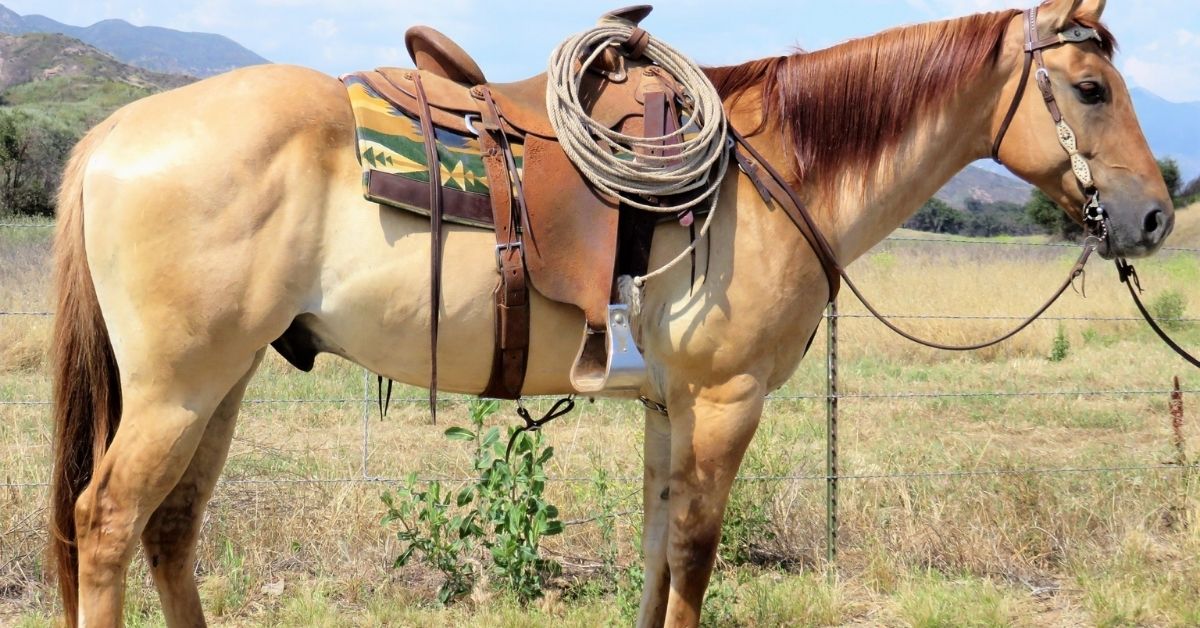 Spirit’s only buckskin trait is that he has a black mane and tail. This is due to his black base coat color and not the cream gene.

How Much Does a Dun Horse Cost?

The price of a dun horse varies depending on its breed, conformation, and bloodlines. You can expect to pay anywhere from $500 to $5,000 for a healthy dun horse.

The price will also increase if the dun horse has registration with a breed association. Another factor is when it has champion bloodlines 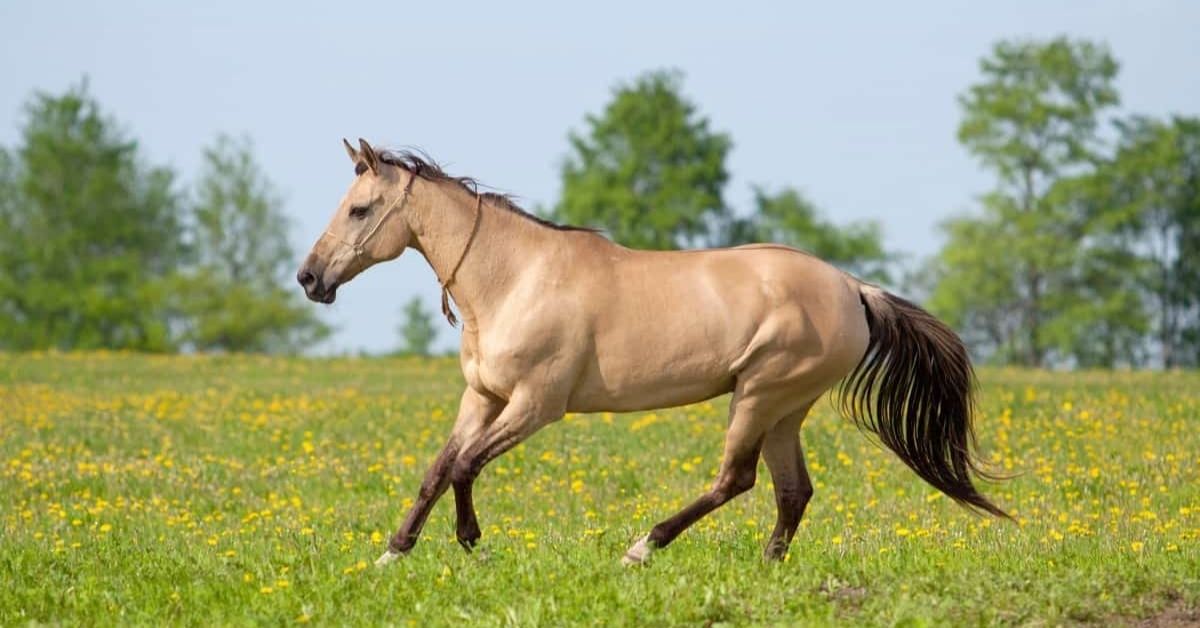 Meanwhile, a dun Mustang with champion bloodlines could cost $5,000 or more.

If you want to buy a dun horse, be sure to work with a reputable breeder. This will help ensure that you get a healthy horse at a fair price.

What Breed of Horse is a Dun?

While it derives from the same bay base coat color, a dun isn’t a specific horse breed. Instead, it’s a coat color found in many different horse breeds.

Some popular dun horse breeds include the following:

Most duns also have shared lineage in specific parts of their bloodlines. The dun coloration results from a genetic dilution gene. This gene affects the coat’s pigmentation. 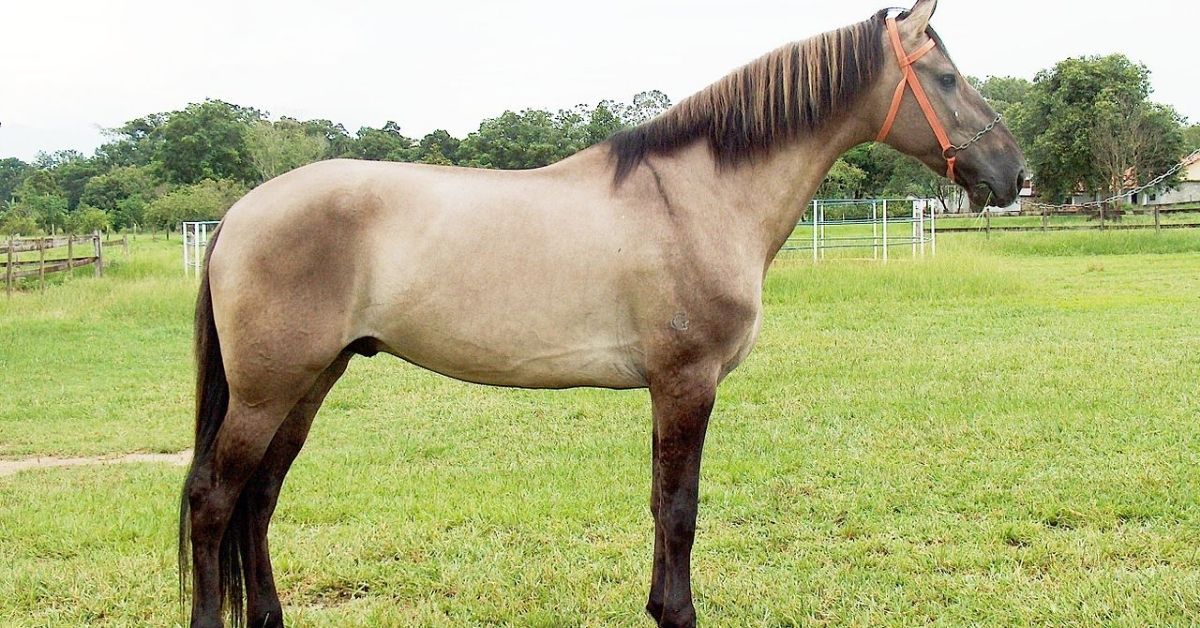 The dun gene is also thought to have originated in horses that lived in Europe and Asia. These horses were then brought over to the Americas by Spanish colonists in the 16th century.

How Rare are Buckskin Horses?

Buckskin is not rare. In fact, it’s a color pattern that’s found in most horse breeds. But, some buckskin color variants are uncommon than other buckskin shades.

For example, the smokey buckskin color pattern is uncommon than the classic buckskin. This coloration is the result of a buckskin horse carrying the gray gene.

Meanwhile, the sooty buckskin color is even less common than the smokey buckskin. This shade is the cause of the cream gene diluting a black coat.

While these variations are less common, they’re not considered rare. In fact, buckskins of all shades are quite easy to find. You can usually buy one for around $500 to $5,000—the same price as a dun horse. 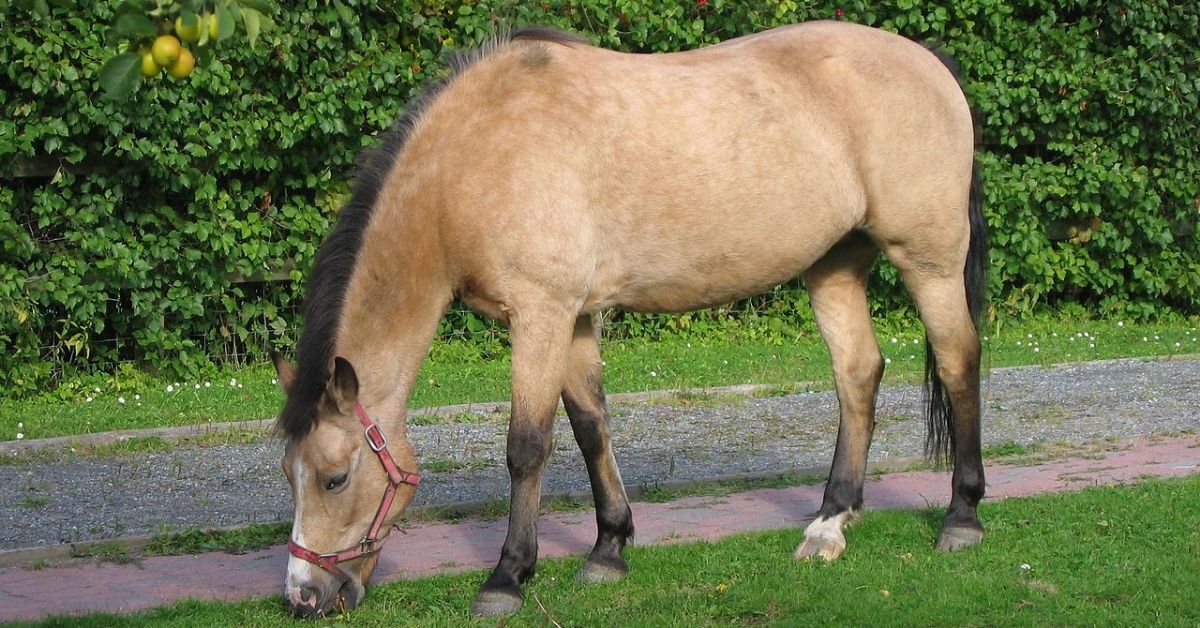 If you want to buy a buckskin horse, check out your local horse classifieds. You can also or visit the nearest equine rescue.

Since buckskins are popular, you should have no problem finding one. There will be a variant that’s perfect for you and your preferences.

Keep in mind that if you’re looking for a particular variant, such as a smokey buckskin, you may have to pay a bit more. But it will be a moderate increase in price.

What Breed of Horse is a Buckskin?

Like Dun, Buckskin isn’t a horse breed. Instead, it’s a color pattern in almost all horse breeds.

These cream or tan-colored horses have unique qualities beyond their physical appearance. Buckskin horses have existed for as long as horses have roamed the earth.

Some experts believe that buckskins were among the first domesticated horses. These animals came to the Americas courtesy of Spanish colonists in the 16th century.

North America during this time was an open grassland. Thus, it served as a natural habitat for horses, including the buckskin variant. 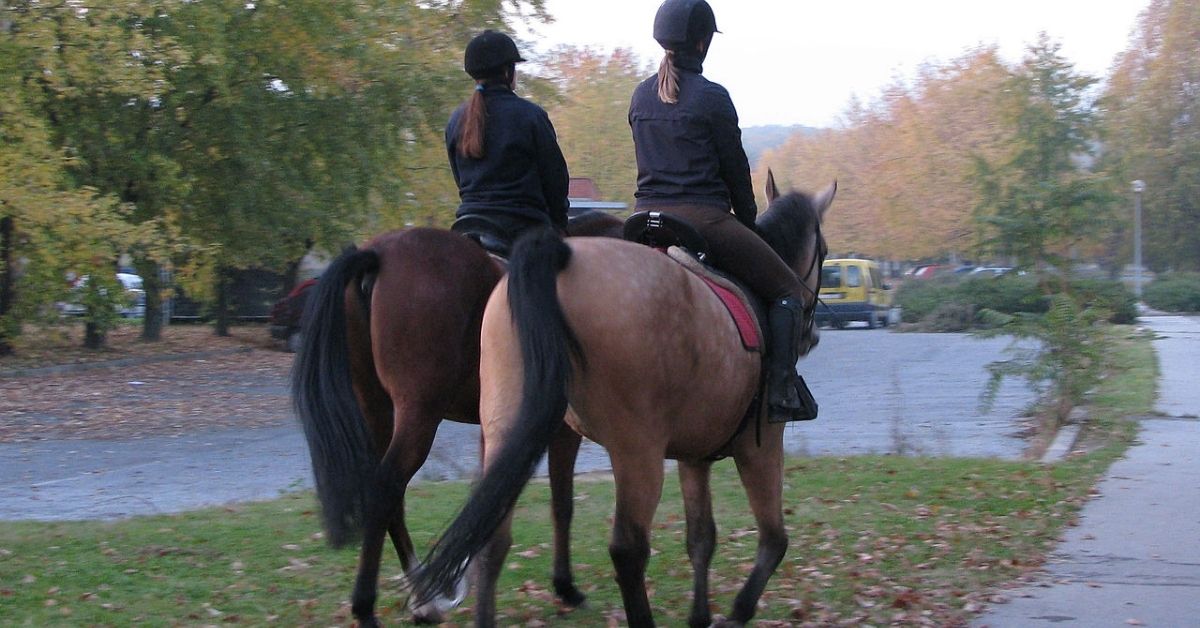 Not too soon, these horses adapted to their new environment and thrived in the wild. As a result, buckskin coloration became common in the Americas.

Nowadays, you can find buckskin horses in every corner of the world. They’re popular among equestrians of all levels and disciplines.

Distinguishing one from the other will still prove confusing to the normal person. But, at the very least, you now have an idea of how to differentiate a buckskin from a dun horse.

Use this guide the next time you go horse shopping or you simply want to know what coat color your four-legged friend has.